Ever since its first appearance, the incinerator has been a very controversial object which people don’t easily trust. Progress and the evolution of technology have both made this building much more sustainable for green development (for example when they turn trash into energy) but the collective imagination has never changed. Moreover, issues like trash disposal and fresh food production in the United States are growing increasingly serious. We must re-think a new living model that will concentrate on all these problems and try to find an adaptive solution with the structures that we already have at our disposition.

Is it possible to create a replicable model for a performing instrument that turn trash into energy, using it to generate fresh food products that people need?

This is the driving question behind this project, following a cognitive path that will outline these kinds of energy facilities: starting from the sociologic history of incinerators to the recent history of Detroit and all the associations of protest, passing through new technologies and methods for trash disposal maximizing returns, reducing the issues of smell, and dissecting problems in the community.

The final aim of this project is to generate an energy cycle starting from waste, reinvesting it within high-tech structures for fruit, vegetables production for Detroiters. This could be useful for an underlying and very hidden problem in the United States, especially in Detroit, which is the issue of food desertification. It is a major wide-spread problem in the whole of Wayne County.

The last purpose of this project is to raise the level of the quality of food and, at the same time, reduce trash produced by packaging thanks to the km0 market hub of this project. The cycle closes with trash sorting, where the organic portion will be sent to a new biomass plant, while the other parts will be divided between incinerator and recycling facilities. These are currently in operation in two areas near the Detroit Renewable Power Area. Energy remnants will be used by the citizens with a district heating network which is already used to lower the very high existing energy bills of the city.

The hypothetic scenario for Detroit could be a possible shrinking city thanks to these interventions regarding energy and food, so the county can reduce the energy waste more steadily. This project would be an example of how a city, drastically crippled by economic crisis – the auto-motive crisis in 2010 – can recover once more with a very clear and solid idea of how to do it. The City of Detroit cannot depend exclusively on the automotive industry, but needs to divide its investments, in sustainable energy, and to improve the welfare and quality of life, starting with food production.

Design is totally focused on energy recovering and its uses. Turn trash into energy: from trash, divided by biomass, recycling and burnable garbage, the incinerator and the biomass plant will produce a huge amount of energy that will serve for the city but also for a vertical farm. The vertical farm could produce about 1,000 tons/ year of fresh foods for Detroiters. The economy circle is closed by delivery network and the market in the food hub where people can buy km0 foods. Rider network will exchange foods for trash that can be brought again to the facilities, developing other energy, and restarting the circle.

Design choices aim to give back to the community two landmarks of the neighborhood and, in general, of the city of Detroit. The food hub will be reduced to its structural skeleton, creating a green core inside a shining glass box where people will be able to work, developing social network, do groceries. The incinerator, instead, will be dedicated on the ground floor to processing and burning trash. The roofs, instead, are designed to be used for sport and as a cultural park. Many activities are developed inside from basketball fields to archery, but also bars, gym, and a very particular street art museum on the roof (“I took the streets on the rooftop”), to testimony the street and hip-hop soul of Detroit.

In the end, this project is one of the first of this typology. Turn trash into energy, combining co-generation energy from trash with a huge biomass plant, all to give the sustainable energy to a vertical farm. Solving the energy problem, we could be able to reproduce this model to give food to humanity without consuming all the energy on the planet. 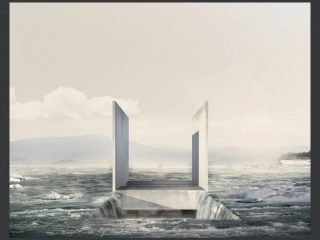 Previous Project (p) In Between