Design unit focused on the residential and habitation architecture. Type of architecture, which accompanies humanity probably for the longest. People were always looking for shelters. Residential typologies changes through the times and evolves depending on society social status. Nowadays new problems and questions from this field appeared. Concentration and sharing of space become more and more popular, sometimes even necessary. The following design tries to explore the issues of temporality in residential architecture, focusing on duration of habitation, flexibility of structure over the time and primarily, on termination of building function. 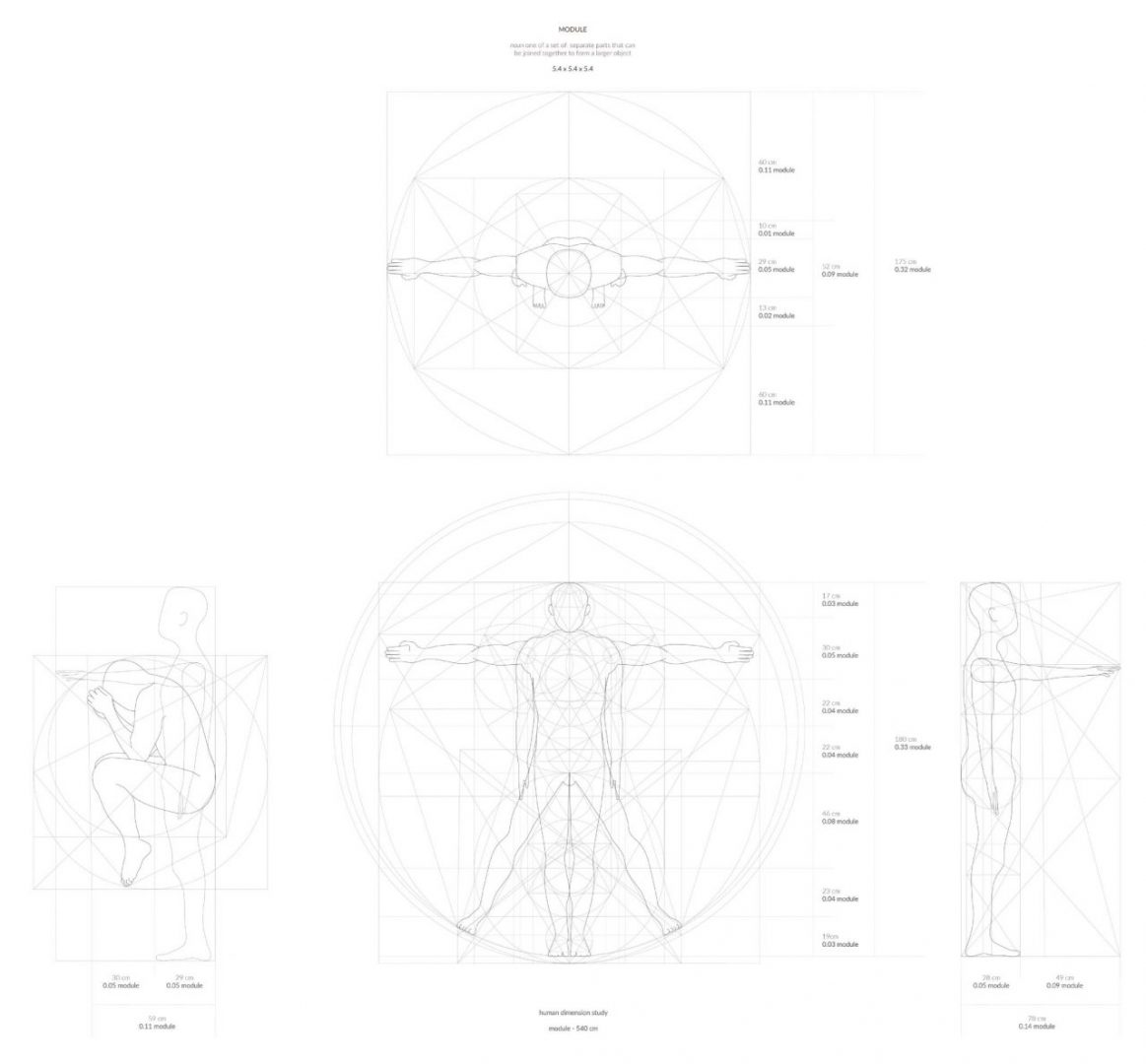 Designed area is a postindustrial territory where the Ghia factory was located. Back in times in those buildings production of metal sheets for cars was placed.  From mid- 1990s area started to be getting abandoned. Nowadays only one of the buildings is used and adapted into co- working space. The plot is formed into unusual, irregular triangle which is placed in- between railways. Corso Dante street is the only connection with the city. The aim of the project was to propose a structure with function of temporary habitation. 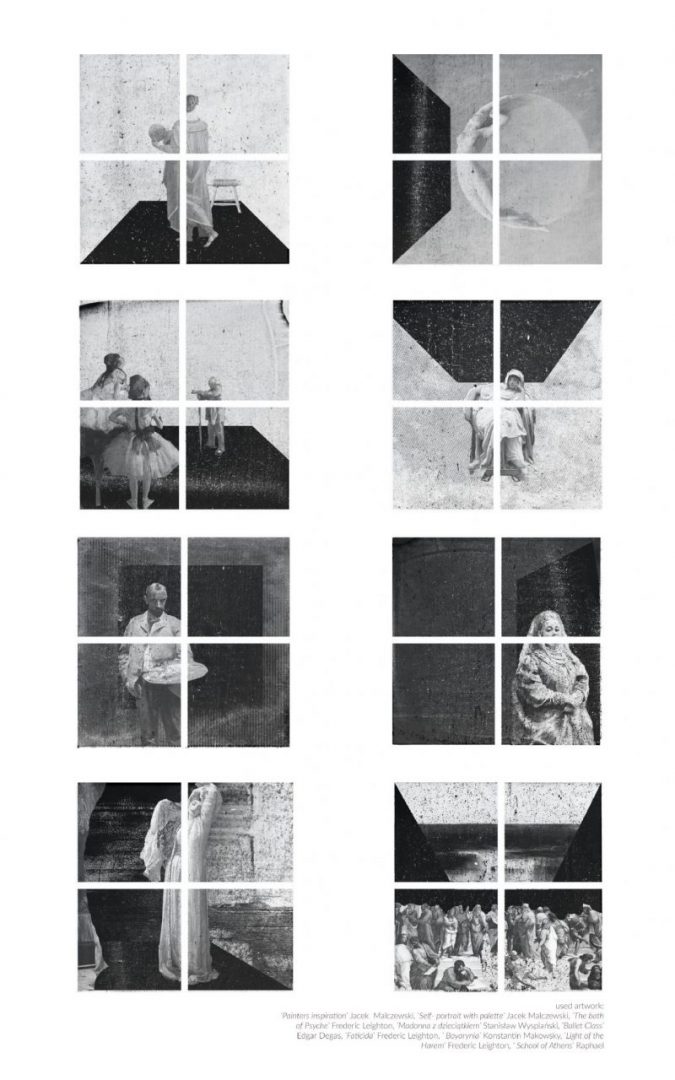 Temporality and flexibility were two main elements which guided the design. Modularity of light steel boxes was the solution which allows to flexible organization, temporary use and not complicated process of development. As it is a temporary inhabitation the main focus was on the problem of minimal living. The question was: how much space do human need to feel comfortable in the space? Another area of interest was also the temporality of building function as one of the most changeable aspects in modern architecture. 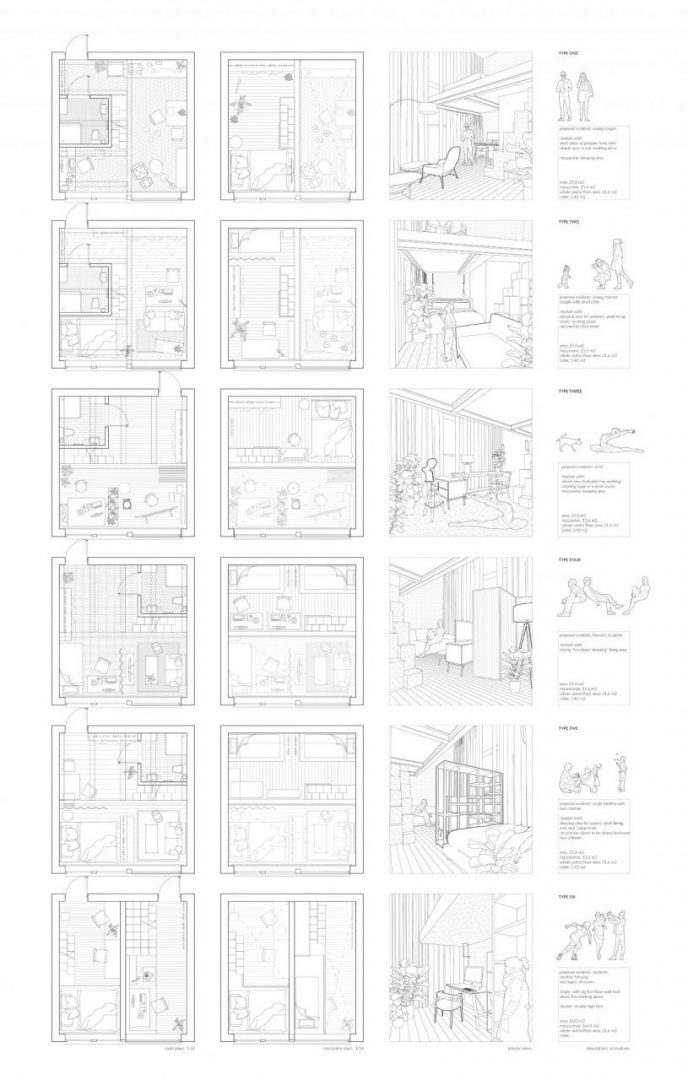 Proposal. Modularity: module of 5.4×5.4×5.4 implemented into project.  Designed boxes will be distributed and arranged all over the structure in time. 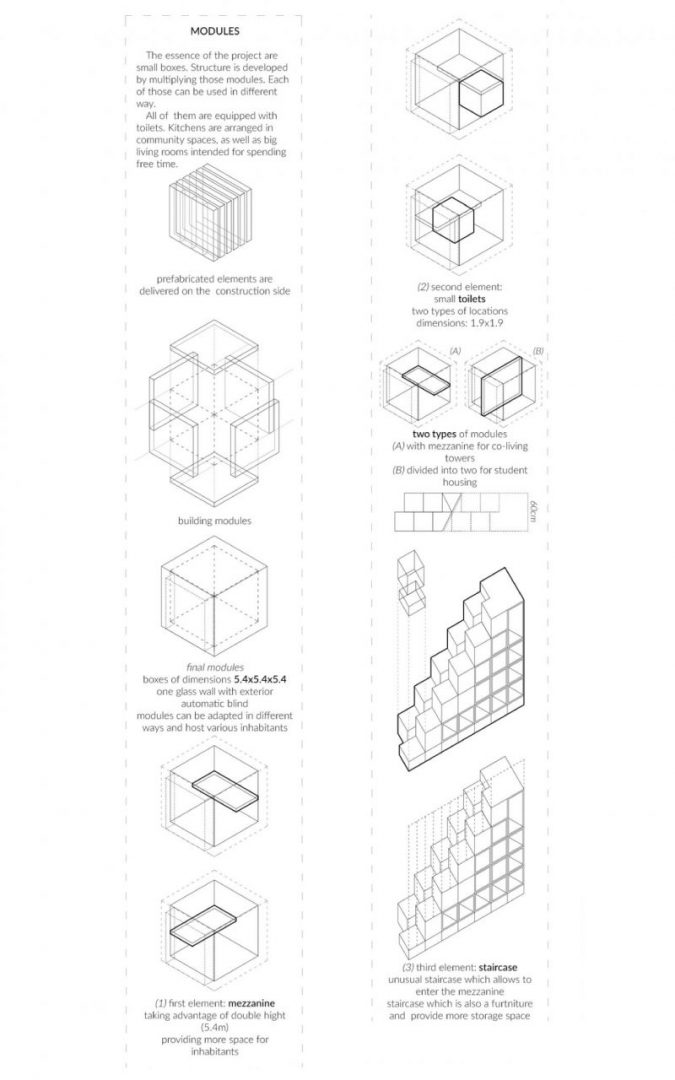 Function: temporary living.  As the living functions in boxes are minimalize, the main purpose of developed residential is co- living. This solution is an answer for temporary living, disappearing social connections and lack of space. Social areas are designed outside the boxes and in- between them and patios. 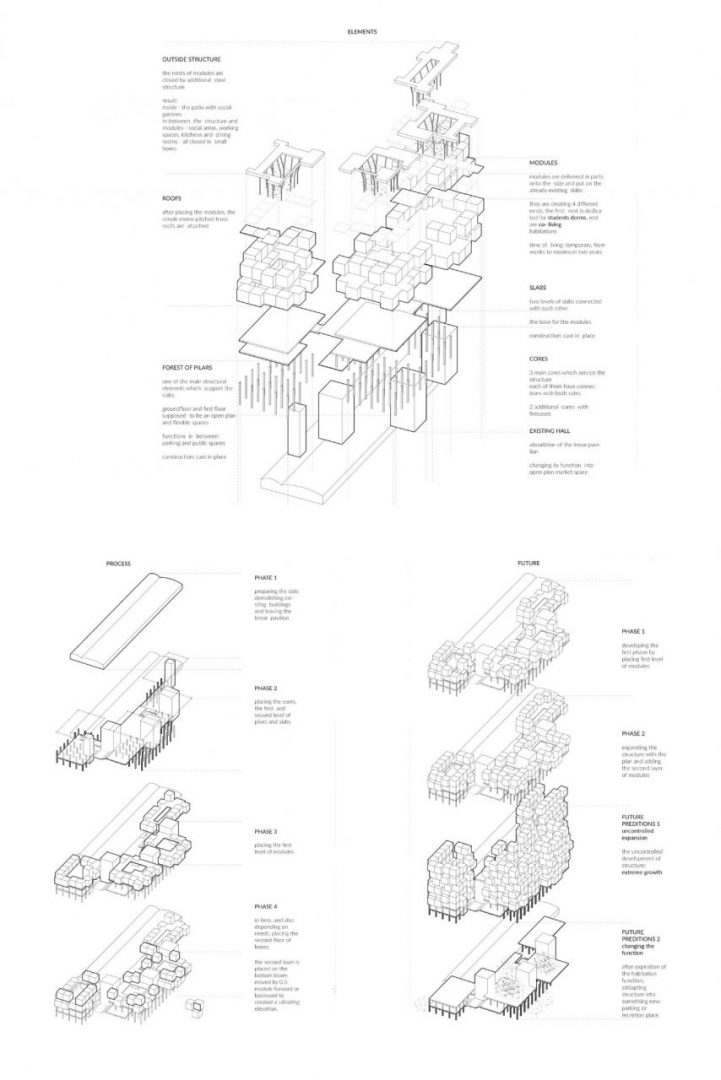 Process: the structure is composed from two main elements.  First- cast in place, constructional base for the design. It consists of pillars and platforms. The light steel structure boxes which are prefabricated and delivered on side are placed on them. The process can be flexible and the expansion of the structure can be controlled as needed. 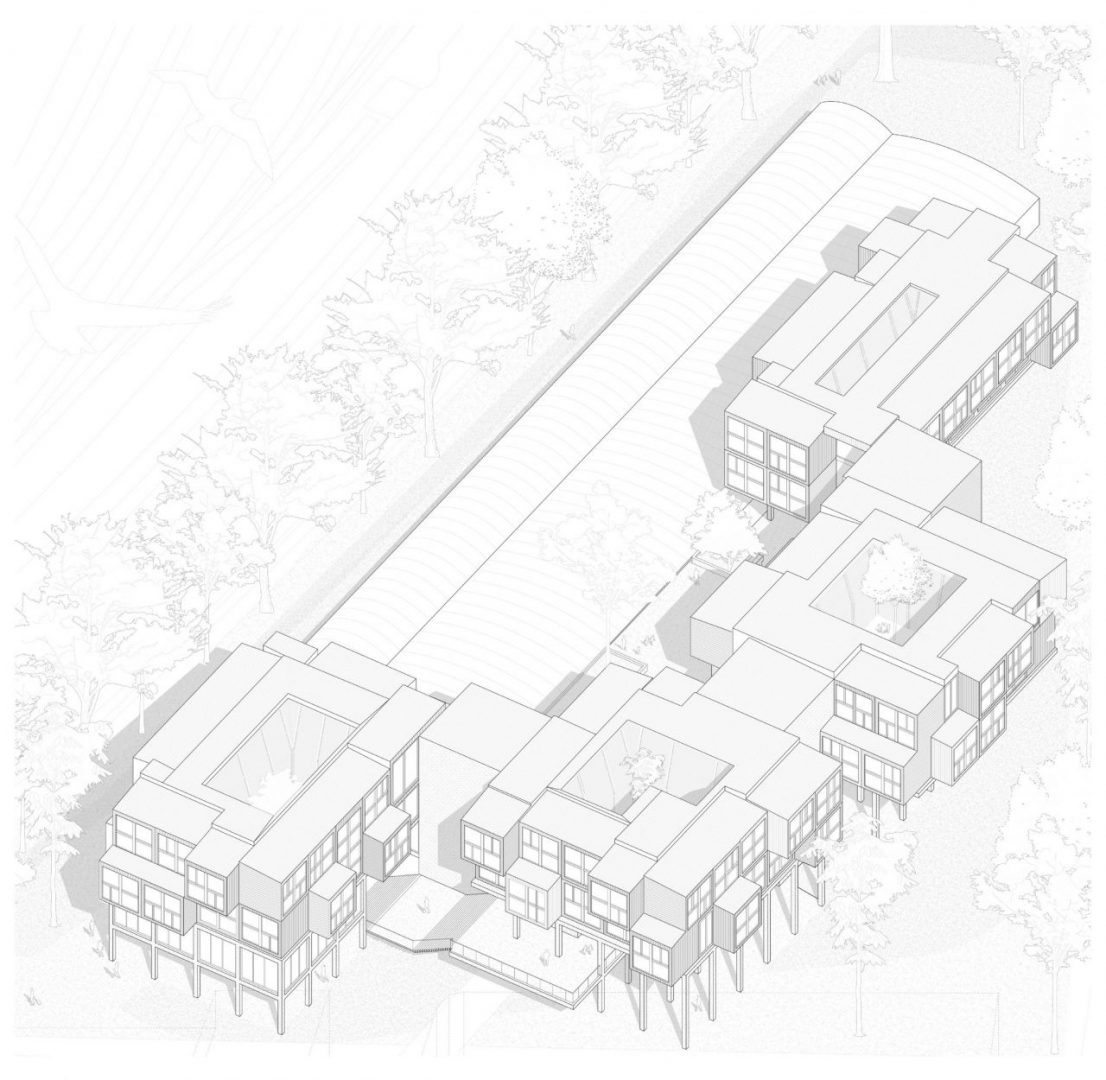 Future: nowadays buildings supposed to be flexible and able to change theirs function. In time the modules can be developed or reduced and new function for platform can be introduced. 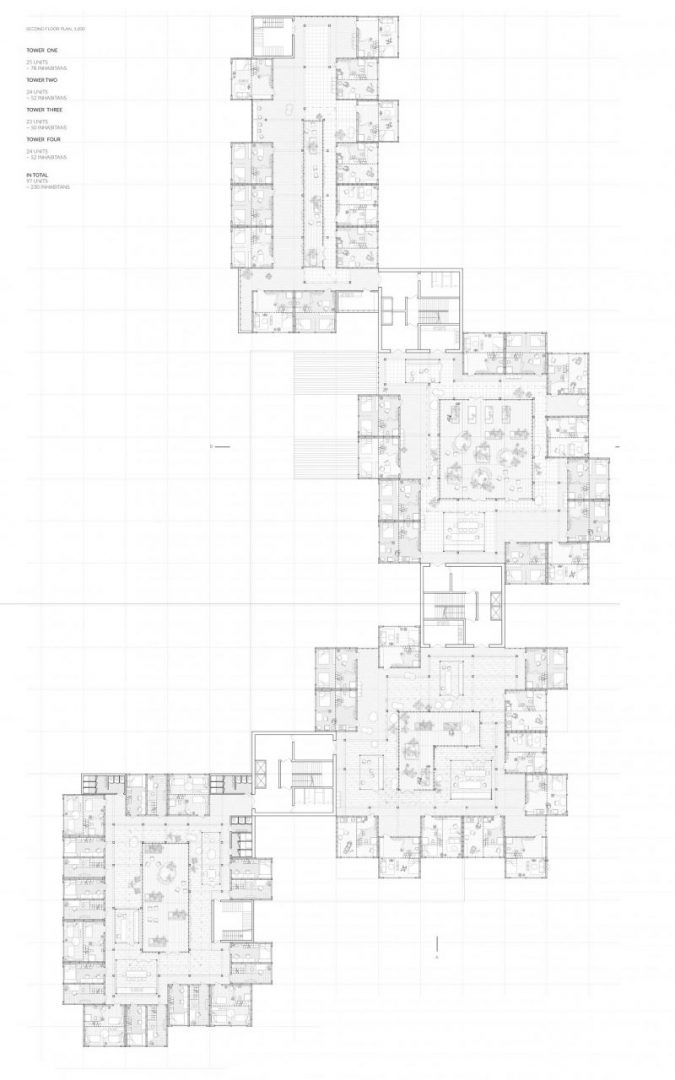 Trace of past: not all building from the side are demolished. To reuse part of the existing buildings, the linear hall is absorbed into structure and new function is given. 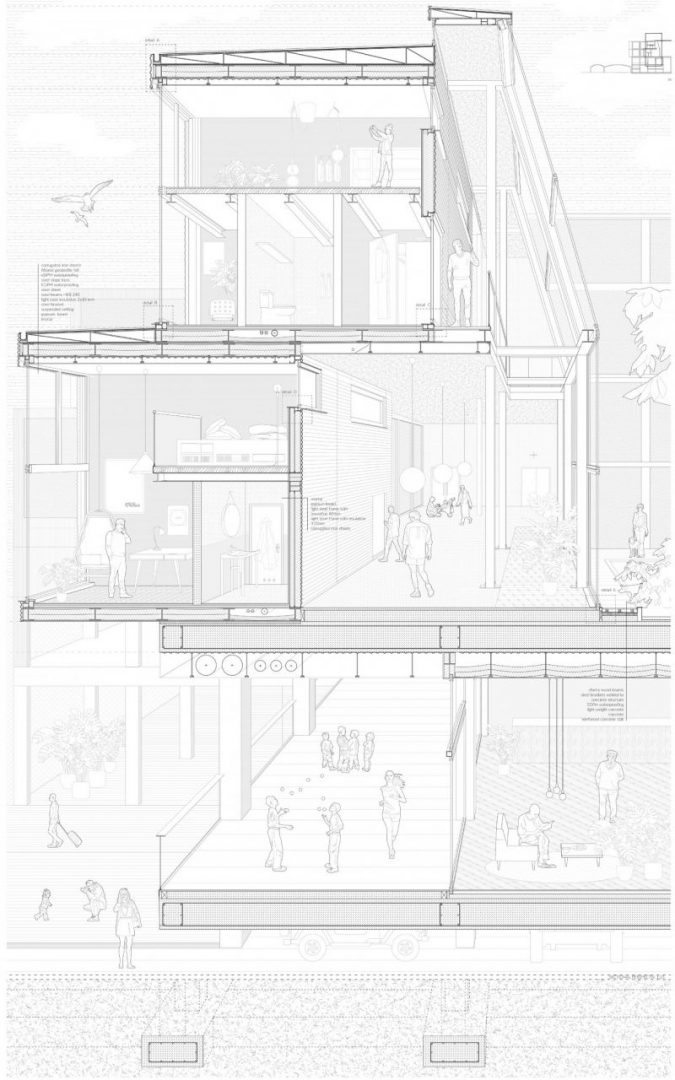 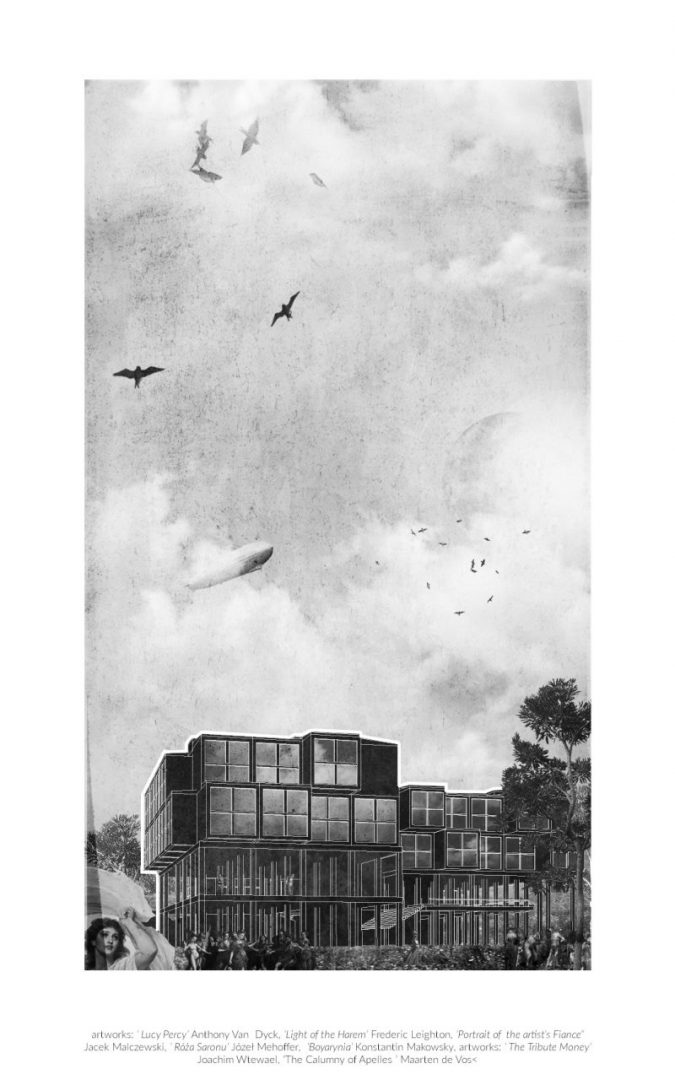 Jakub  Kozaczenko and Apolonia Slesarow graduated at the Wroclaw University of Science and Technology, currently they are doing a master degree. Meanwhile, one year exchange in USP CEU San Pablo Madrid and half year in Politecnico di Torino. 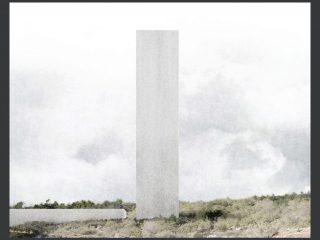 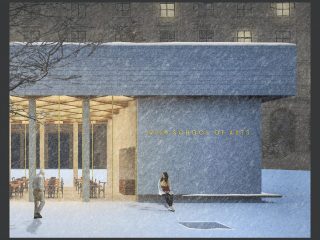