The approach to an architecture like this one must be based on respecting its memory as a ‘laica basilica’. Piscina Mirabilis is a monumental roman project that doesn’t need any superfetation. The functionalization of this space starts with the recovery of the element that represents its root, the water.

The aim is to quietly insert the project, restoring and respecting the original beauty and function of Piscina Mirabilis, both inside and outside the cistern area. Suddenly, the sensory aspect takes place instead of the form, through the installation of full-height mirrors, between the 10th arches row from the main entry, which splits the exposition area from the supporting space and gives the visitors the impression of witnessing an untouched basilica’, reflecting the space in front of it. Besides, the conquer of its height to appreciate the importance of the structure at different levels becomes the second main protagonist. 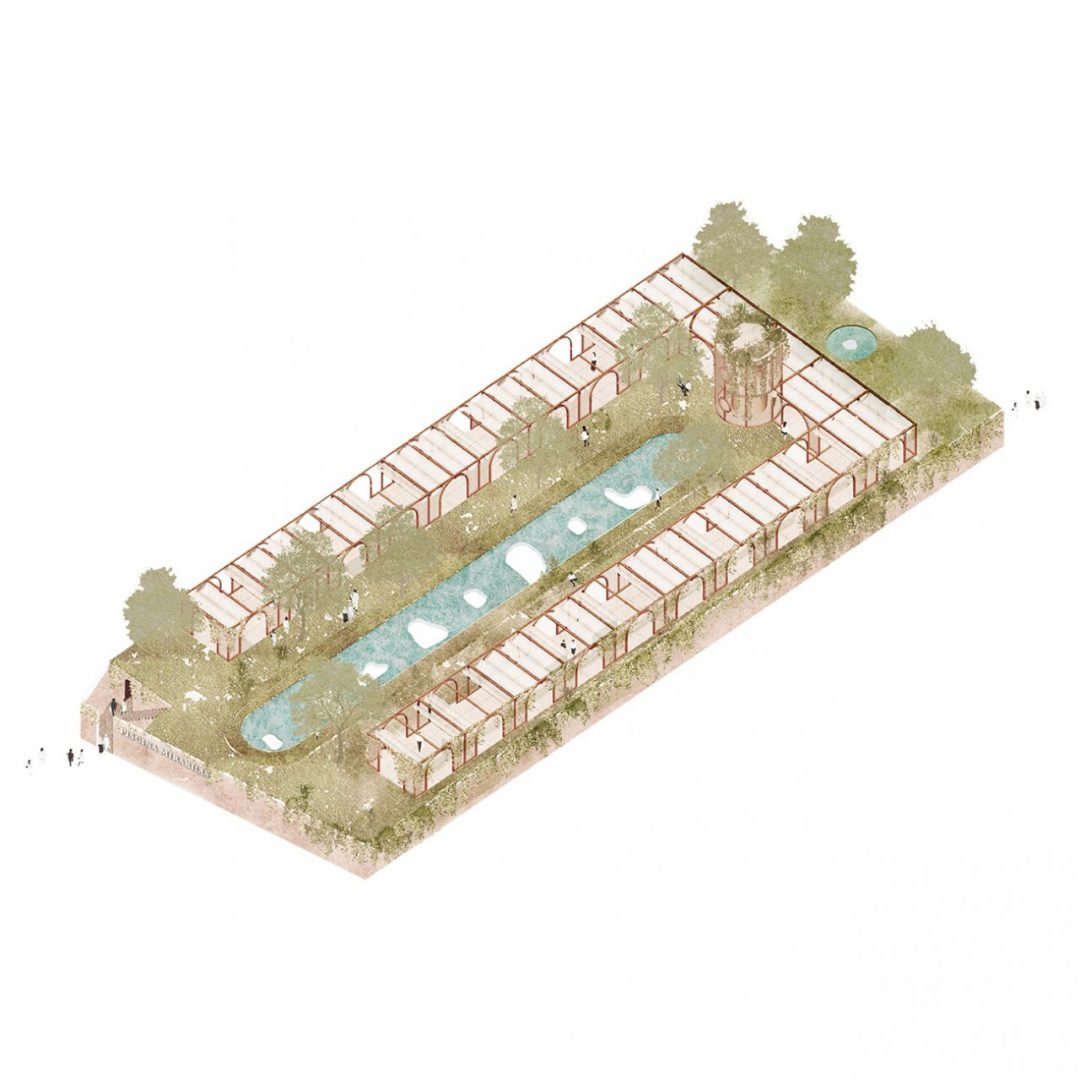 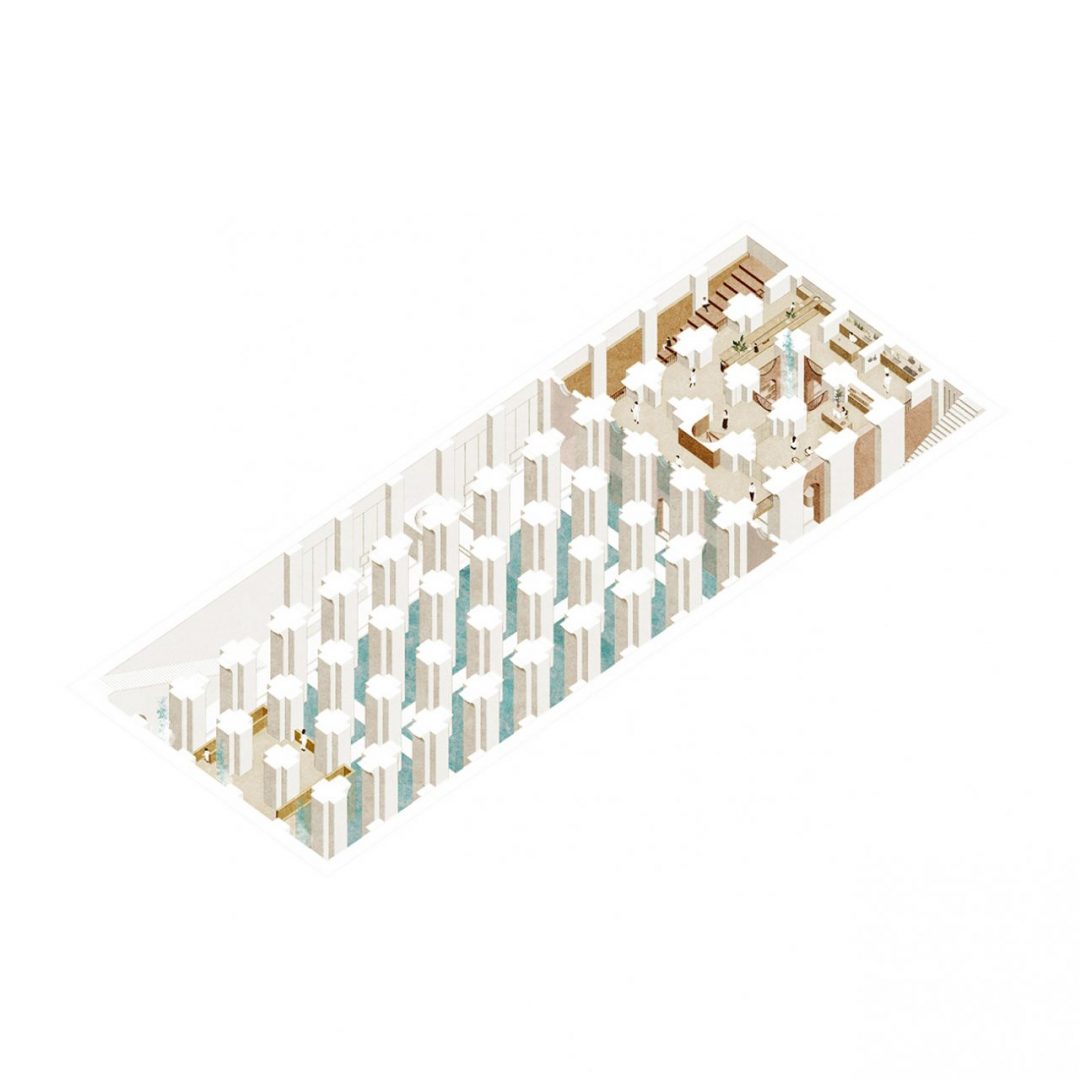 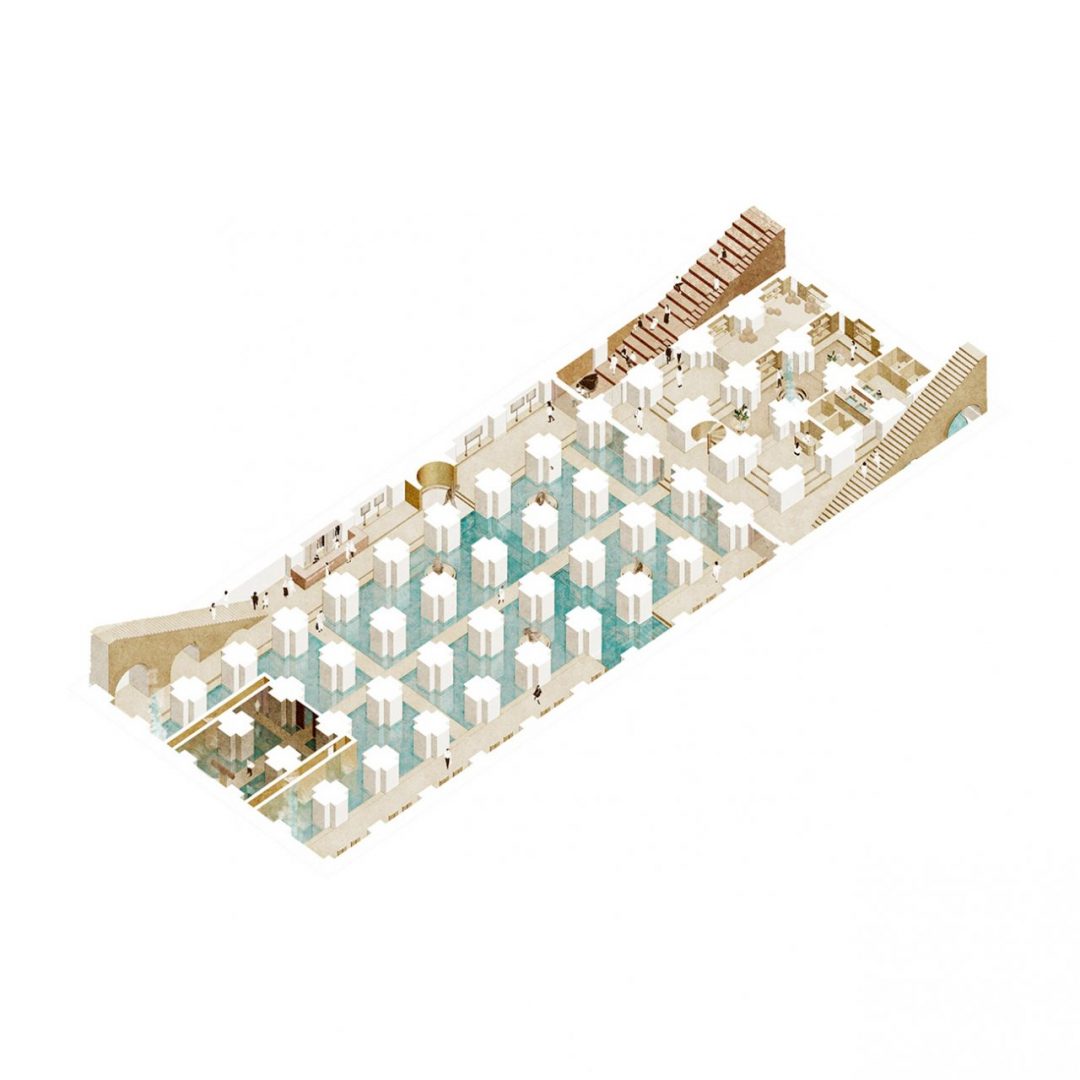 The contemporary art exhibition is entirely visitable by a pattern of paths surrounded by the water,that recover and point out the directional development of the space. The Operas are always set in different ways using the natural peculiarity that the several conditions this place offers.

The echo, the falling drops sound onto the water, the strips of natural light are used as an element in support of the artifacts and method to lead the visitor through the exhibition.The central path represents the pivot of this organism. At its left end, the visitor is attracted by the glow that comes from a mirror-cladding box (with a terrace on top) where the low light level creates an emotional environment for the glowing masterpieces of artists such as Dan Flavin. 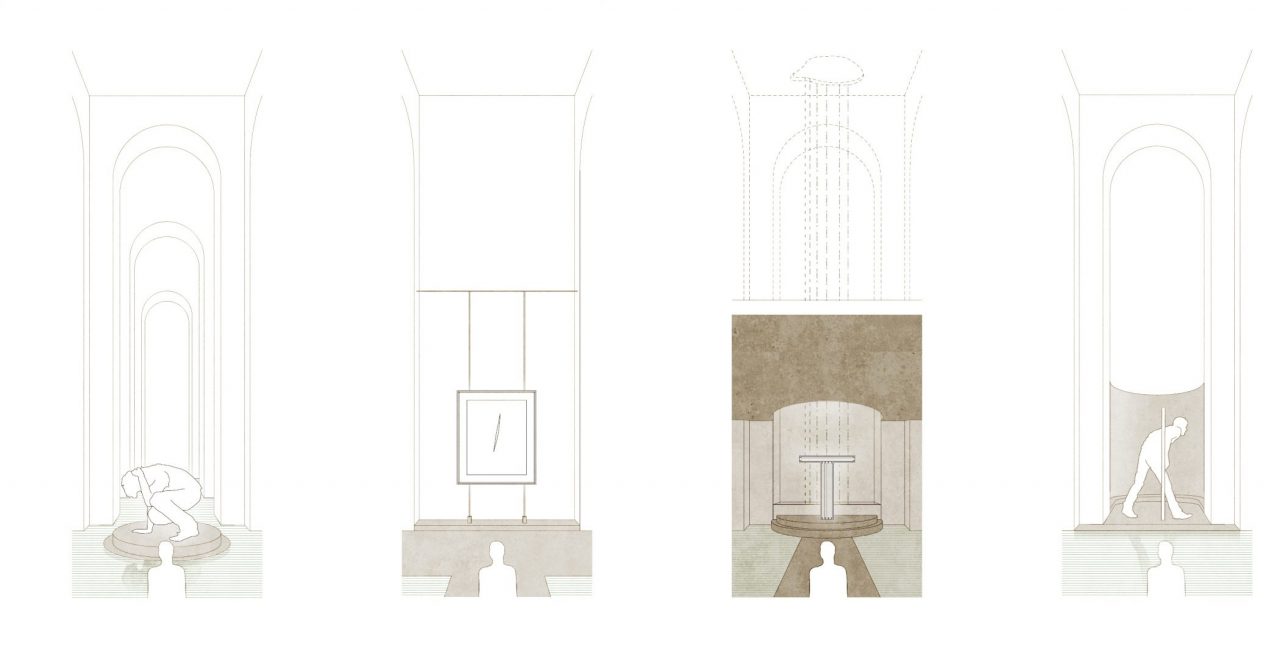 Continuing along the leading path, approximately at the middle point of the system, where the change of the water depth takes place ( know as ‘Piscina Limaria’ ) the visitor is invited by this alteration to stop and follow the transversal direction ( the Basilica’s ‘transetto’ ) to observe free-standing operas, like the Edoardo Tresoldi’s statues, placed on four islands and on the central exedra. 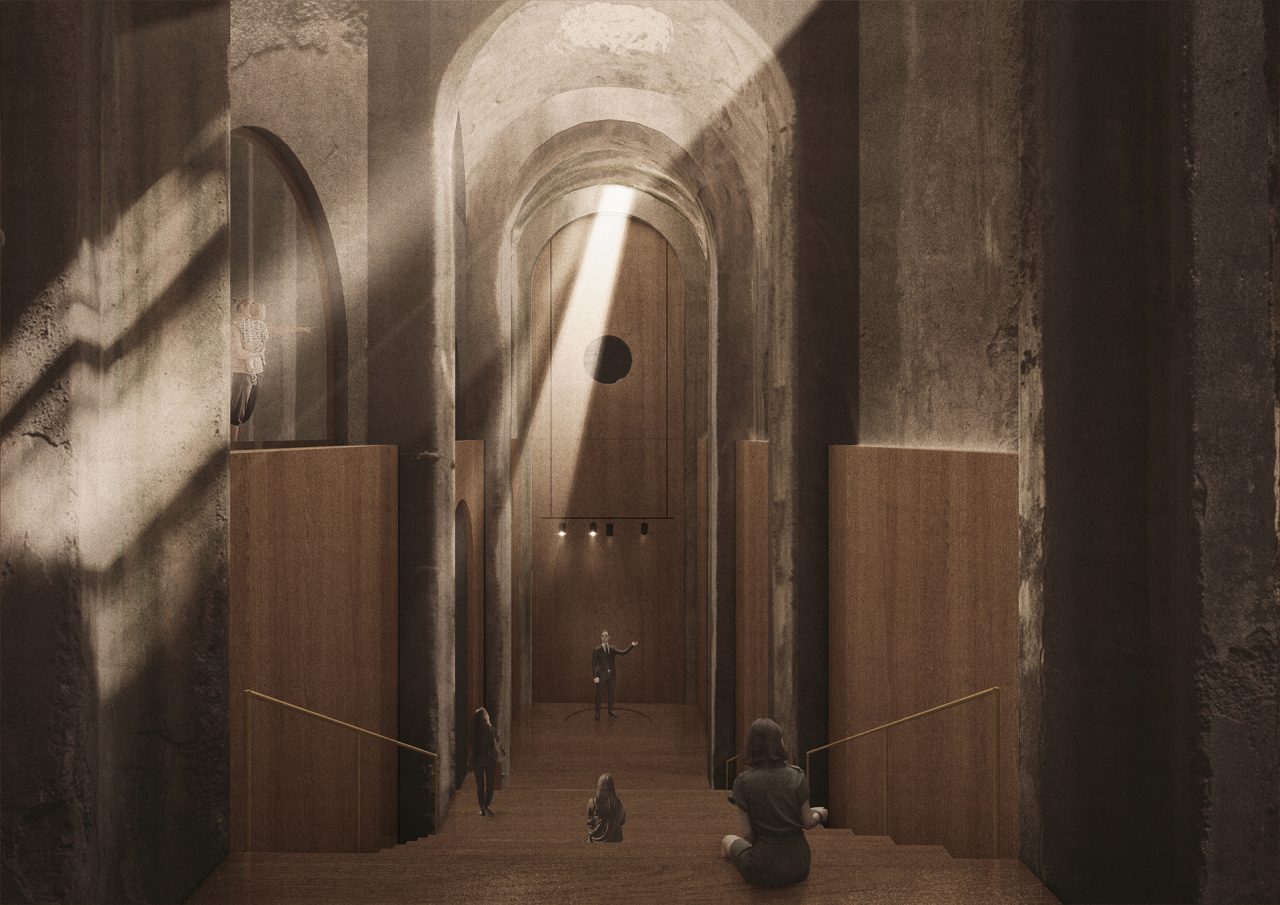 Just before the passage through the mirrored surface, the paths are re-connected by a transversal one which leads to the longitudinal walls, where delicate supports find their place between the columns, to locate the operas. Beyond the mirror,  an additional core element of the project takes place, the spiral stair. This one, built into the biggest existing hole, links the 3 levels ( lower, middle, upper/outdoor)and turn into a ‘shy tower’ when it pops out from the indoor area.

Panoramic terrace sits on top of the staircase, becoming an observatory point to admire the surrounding. In this second area, the bathrooms andthe storage area take place, as well as the conference space, interpreted as an ancient theatre where people can sit on the ‘klimakes’. 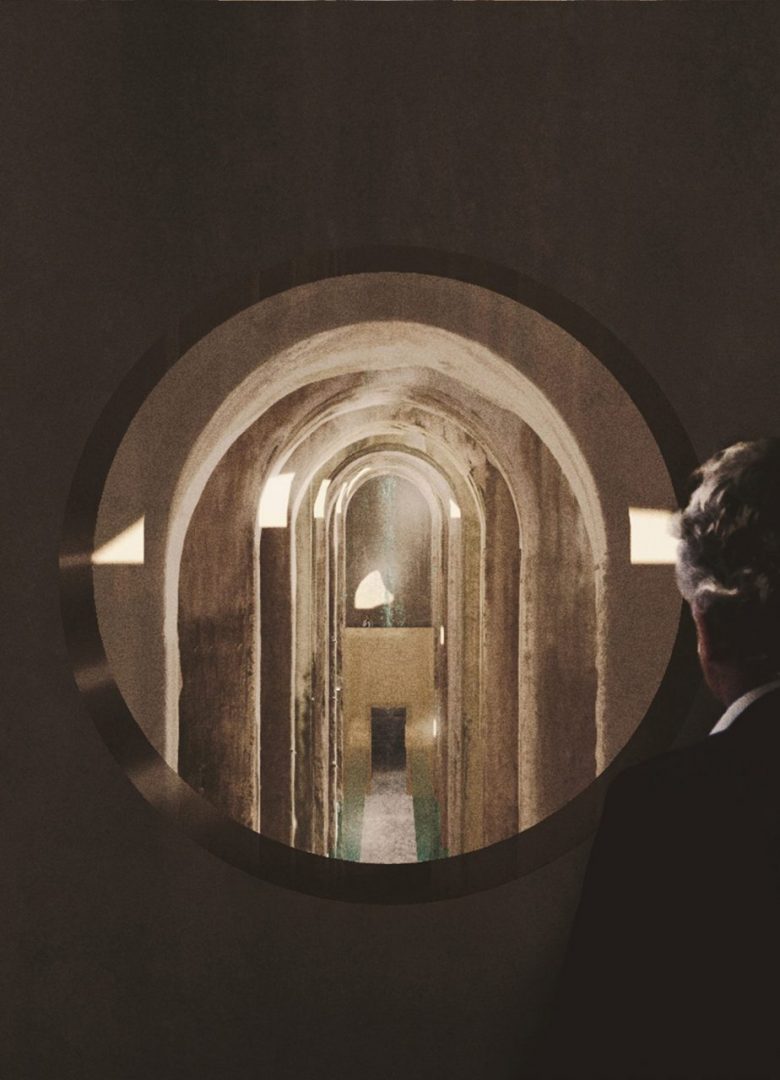 The core of this second part of the building is the ‘fonte’, a double-height space, used as a bookshop, where also the people on the first floor can look at. The First-floor hosts the administration office and the bar / restaurant, whose accessibility is independent of the exposition area and guaranteed by the spiral stair at the garden level.  The external surface retains the existing central holes to bright the corresponding path at the museum level. These ones are collected into a pool and are often provided with protections that prevent the water to fall into them and, in some strategic points,left protection-free to create an atmospheric waterfall into the space below. 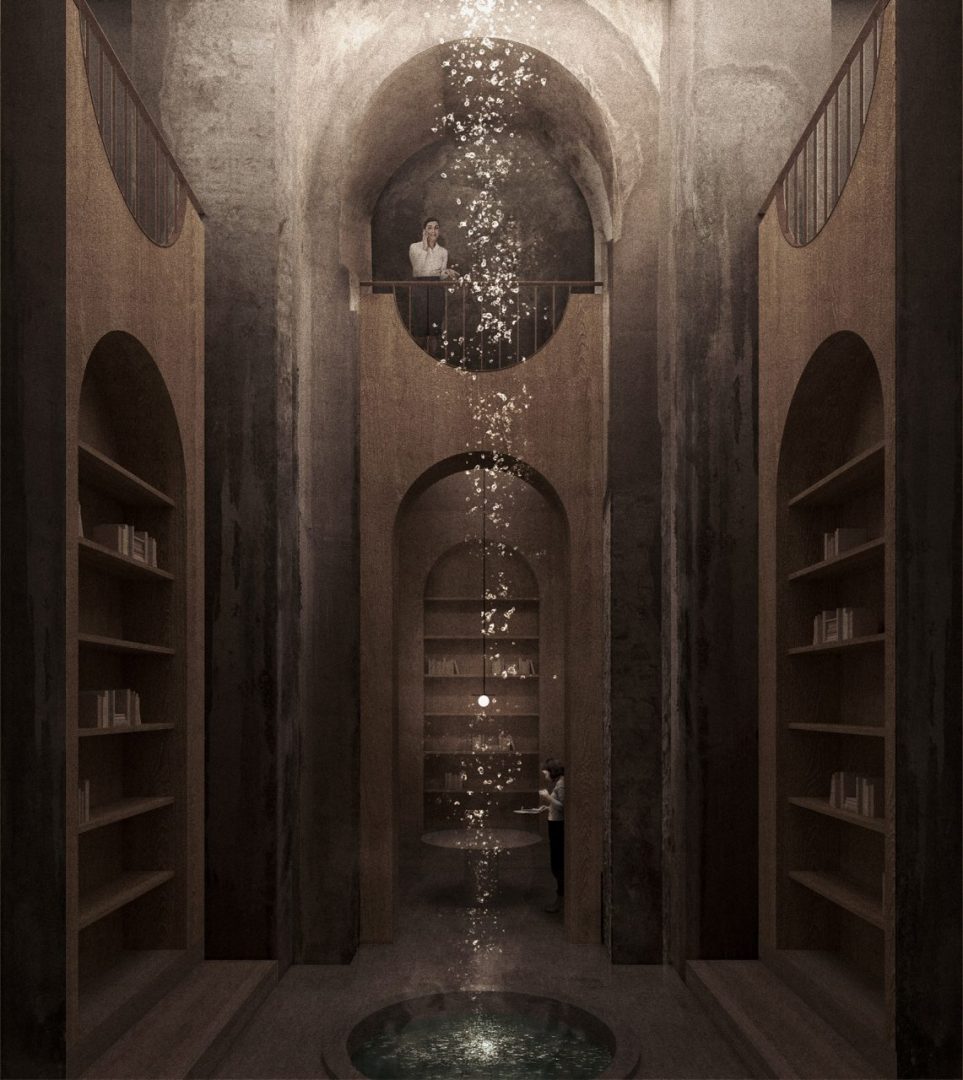 The upper level is mostly used as space open to the public and represents that element that completes a green belt made of the wood area at South- East and the ‘Villa Comunale’ at North-West. The light metal structure with a growing-vegetation on it, that follows the location of the existing columns underneath, is used to create a natural corridor to provide shades to the visitors and a clear path to entry into the restaurant,theatre and the spaces below. A project created to preserve, not to change or astound. 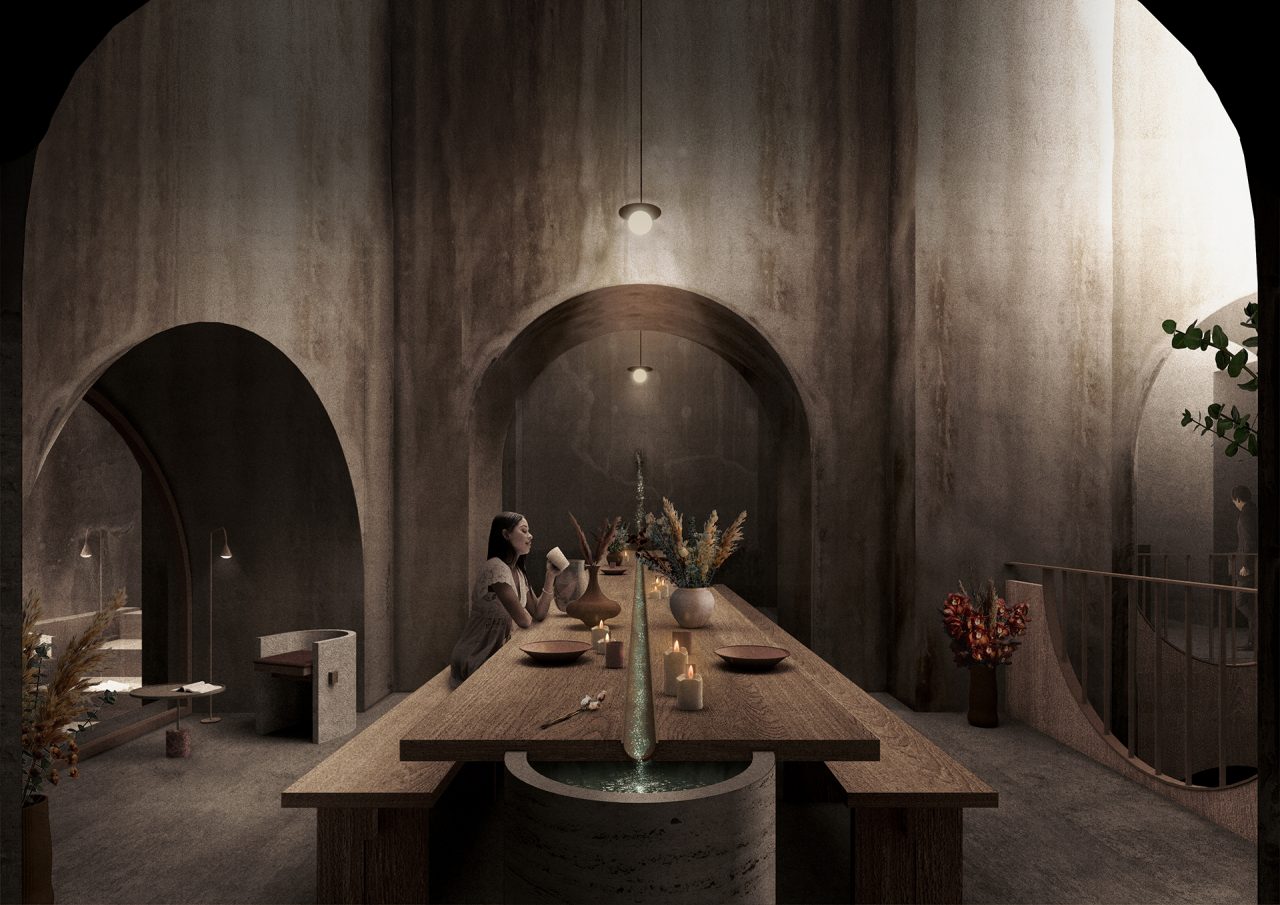 OPUS is an architectural and design atelier founded by the architects Maura Pinto and Piervito Pirulli as a result of a long journey started at ‘Politecnico di Bari’ where they both graduated in 2015.

After a brief period, working together on several projects in Italy and abroad on different scales, they decide to begin separately their own international paths in Spain and Belgium, the first and in UK, the second.

In 2019 they start to develop their own idea of architecture, between Italy and UK, establishing OPUS Atelier. More on opusatelier.it 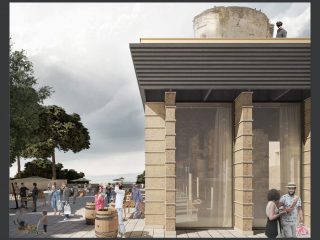 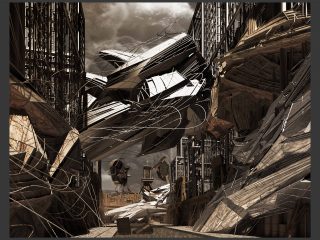 Next Project (n) In between Spaces