Exploration is in our DNA. Two million years ago humans emerged in Africa and then slowly but surely began to spread across the entire planet by reaching and investigating wild places that had been beyond their horizons. Many of humanity’s major achievements appeared precisely in the exploration process.

Nowadays, colonization of Mars for many people seems unreachable and something out of science fiction. The truth is, the technologies for such a journey began to be created long ago. And now we have a lot of developments that are waiting to be used. Of course, there are many tasks that we will have to solve. However, there have been numerous instances throughout history when the man obtaining the goal achieved the impossible.

One of the constraints which we will have to deal with while building a habitat on Mars is the delivery of building materials or the house itself. It is very expensive. Therefore, the load should be as light and compact as possible. Another constraint is the condition on the red planet. They are very different from the earth. Science will help to reveal the details of these processes and together, scientists and architects will be able to create a unique habitat that will help survive the harsh conditions of Mars.

Origami Habitat is an origami deployable house that will serve as a shelter for the first inhabitants and the most important component for creating the first Martian colony. It can accommodate up to four people. One of its distinguishing features is the vertical configuration. It is a convenient way to organize space under Martian conditions. Low gravity allows easily move between levels and because of the Mars’s thin atmosphere, the wind is very weak and therefore will not have a significant impact on the habitat. The diameter of the house is limited by capacity of the rocket.

Each level of building has its own functional purpose: 1 level – Preporation for extravehicular activitity, 2 level – Laboratory, 3 level – Sleeping and sanitation room, kitchen, 4 level – Recreation and exercise space. Each activity of the colonists taking place inside the house will take place at different levels, thereby creating a more organized environment for comfortable living. 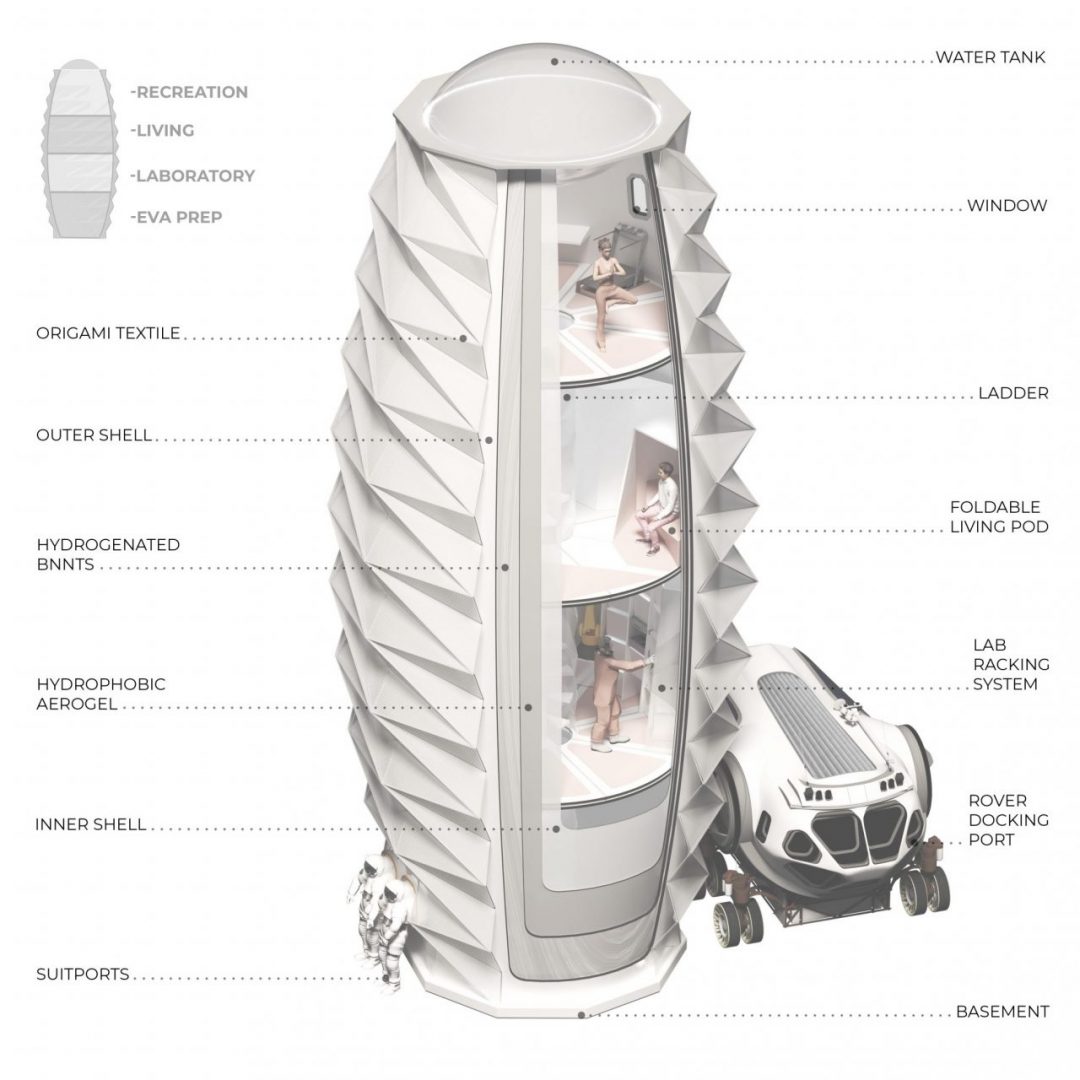 The habitat consists of two independent shells. The outer shell is a lightweight origami textile with embedded solar panels which can follow the sun to gather more energy thought the day. The inner shell will serve as a protective layer for the settlers from solar radiation and extreme temperatures. Hydrophobic aerogel will serve as insulation in the house, since it is very light and it has a very low thermal conductivity.Hydrogenated boron nitride nanotubes (hydrogenated BNNTs) will be used as radiation shield.There are nanotubes made of carbon, boron, and nitrogen, with hydrogen. Hydrogen can blocks radiation particles well and boron is an excellent absorber of secondary neutrons. There is also a water tank at the top of the habitat which is a source of natural light and also protects from the most dangerous rays when the sun is at its zenith. Also the building is equipped with suitports and a rover docking port in order to avoid ingestion of toxic perchlorate salts.

The principle of the first Martian colony will be as follows: At a safe distance from the rocket’s landing zone, there will be a camp for fifty pairs of the first colonists. A few things will be needed to secure their survival. Water is the basis of our life and one of the most important things we need. So we have to find water to survive. It turns out that there is a lot of water on such a dry planet like Mars. The soil is up to 60% water and there are a lot of ice deposits in the craters and at the poles.

But mostly the water is in a solid state or underground, and it will take a lot of energy to extract it. In the future we will be able to do it. In the meantime, we have an amazing device capable of extracting all the water human will need from the atmosphere on Mars. There is a similar solution for air – a device that sucks in the Martian atmosphere and pumps out oxygen. Solar panels and nuclear reactors will be required for energy production. Hydroponics farms will not be able to produce enough food, so food will be delivered from the Earth in dry form. We will use hydroponics to grow food, but we are not going to have sufficient amount. So, most of our food will arrive from Earth.To return to Earth will require the production of fuel on Mars. Using the efficient Sabatier process, methane can be produced and also the by-product of this process is hydrogen and oxygen, which can be used for further application. 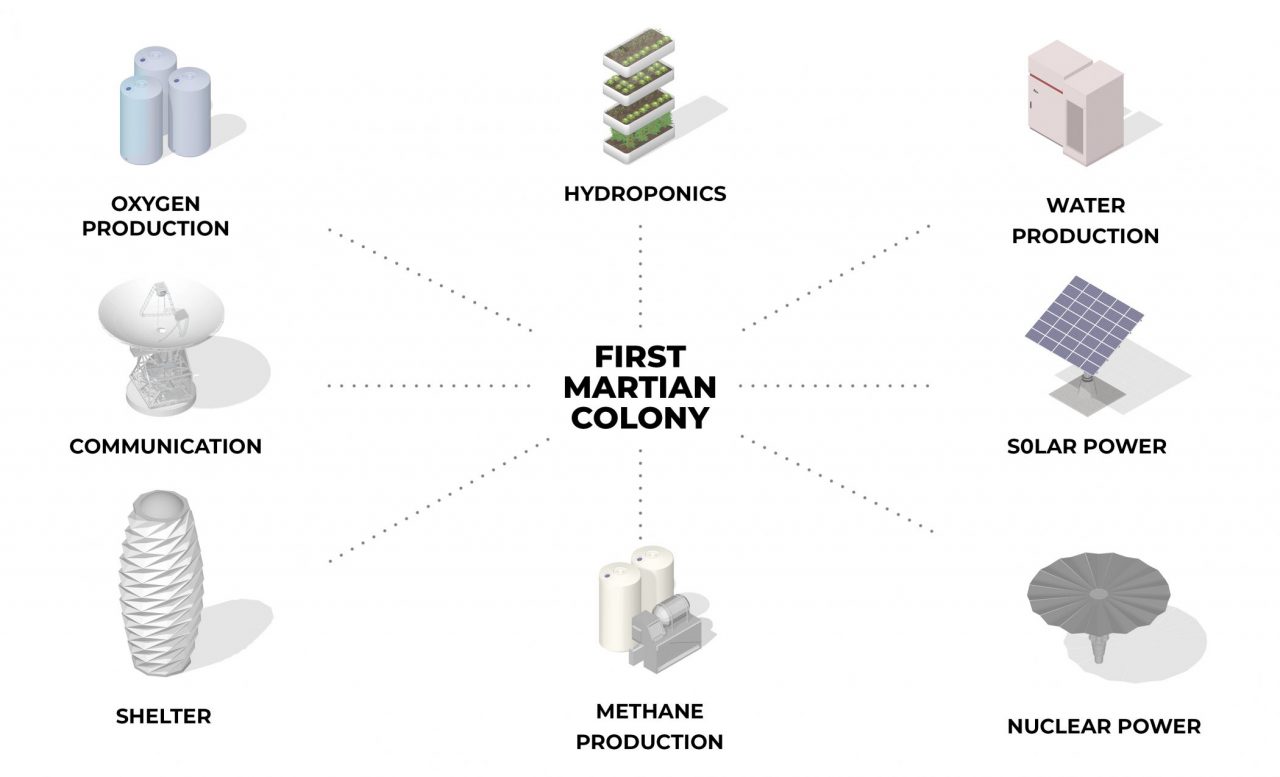 As a result, we get a unique settlement, fully formed on the basis of the physical features of Mars. It provides people with everything they need and is completely self-sufficient. The colony will grow, settlements will form cities, which in turn will allow people to explore and answer many life-changing questions. This will initiate an exploration of the entire solar system.

Iakovlev Daniil  graduated from the Faculty of Architecture at the St.Petersburg Repin State Academic Institute of painting, sculpture and architecture of Russian Academy of Arts in 2016. Now he is a freelancer. He is interested in the direction of sustainable architecture and space architecture. 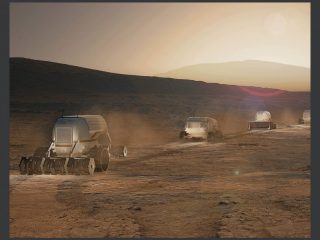