On March 16th we met Isaac Peral Codina, architect of IP Arquitectos in Alicante (Spain), to ask him some questions.

“Hi, my name is Isaac Peral from the architecture studio IP Arquitectos. It is a studio which works in the Mediterranean area especially in Alicante, Valencia, Murcia. We’ve been working from almost 20 years building new realities, ideas, projects, illusions for all the people who finally trusted us to make their dreams come true.”

What will be the evolution of architecture as a discipline in the future?

I think we have only one way. Architecture must take more care about our planet. Architects must be aware of the huge value and beauty of our environment and ecosystem. Architects must be ashamed about making architectures which are disrespectful to our planet, which don’t integrate themselves in the context and don’t produce beauty. Yesterday there was a manifestation in Madrid in which children and young people took part. Their posters said “Without planet there is no future”. I totally agree. Architecture in the future will be totally sustainable, not only for our environment  but also socially and economically. Socially means that architecture will be much more flexible and free. Everyone of us will use architecture according to their needs. Also, it will be cheaper to build and preserve. I think this will be the only way. We already have the tools, we miss the revolution and the mind change. But this is your task, young people. We adults can’t do it anymore.

What will be the architect’s skills in the future?

I think that the role of architect in the future will be like an intermediate, a manager. The topic of design will take a second place because technology is running so fast: structural calculations, installations and the drawing itself will be much more accessible to all who have informatics skills. What will be more important is the ability to build relationships, to manage and to observe. It’s important to be able to identify the problems, to find out solutions among all the technology’s possibilities. We’ll have to choose the best one in order to carry it out and to handle it, that is the most difficult part. We also have to consider that architects of the future not only will build tangible architecture, but they will face ethereal constructions, strategies, ideas, something wider but more interesting.

What are the problems that architecture of the future will have to face?

Our cities are developing at intense rhythms. We know that extensive cities will be unsustainable. The higher density should be more sustainable and this is a matter that architects of the future will solve. Matters like contamination, noise, pollution, health problems. We’ll design buildings with the aim of regenerating the ecosystem. Those architectures will improve public wellness and the environment. They will be like green lungs in the cities. This is the big challenge of the architecture of the future.

What are the features of your projects that respond to current and future problems?

There are five topics about architecture, five Leitmotiv, that appear in our projects, which we consider important. The first one is the city. Architecture must be kind with the city, produce something good. For example, when we had the job for the San Gabriel house, in a very important quarter for Alicante citizen, we asked ourselves “Why is this quarter so interesting?”. Architecture and urbanism were very modest, the most important things were the social life, the relationships among neighbors. The ground floor and the shops let the people building relationships among themselves. They had a very strong sense of belonging to this quarter. The people knew each other but this was being lost because of the use of the ground floors: garages, storages. The shops were disappearing. The first request of the owner was a garage. This was the last thing we would have liked to do. We thought about Alejandro De la Sota, a famous architect, the Spanish architecture father, very well loved. He said that when a client asks an architect for something, he must consider his requests, making the best out of them. It’s like “to trick” the client but to give him something better. We did that. We designed for him a ground floor with an open-air patio, a garden open to the quarter, where he can also park. When the doors are open, this space turns out to be interesting. It’s a social space, where to see processions during celebrations. We were very happy because we improved the social activities. That was the main value of the quarter 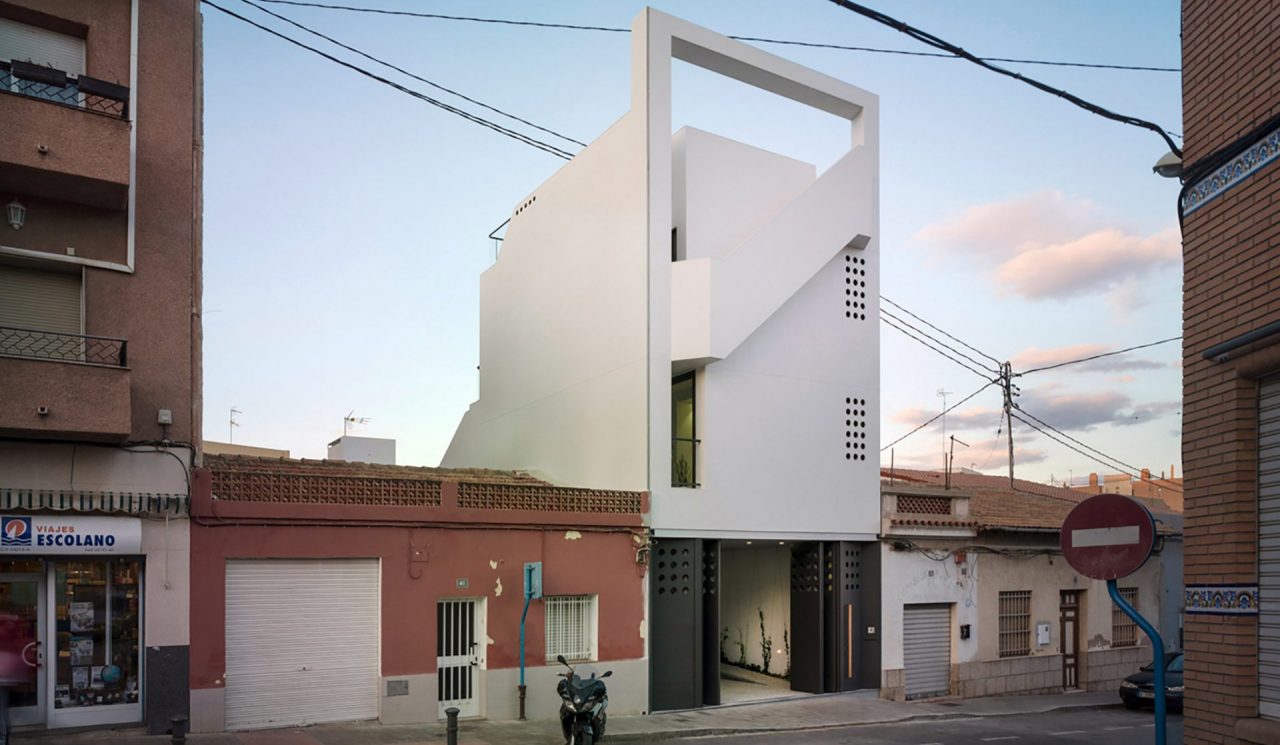 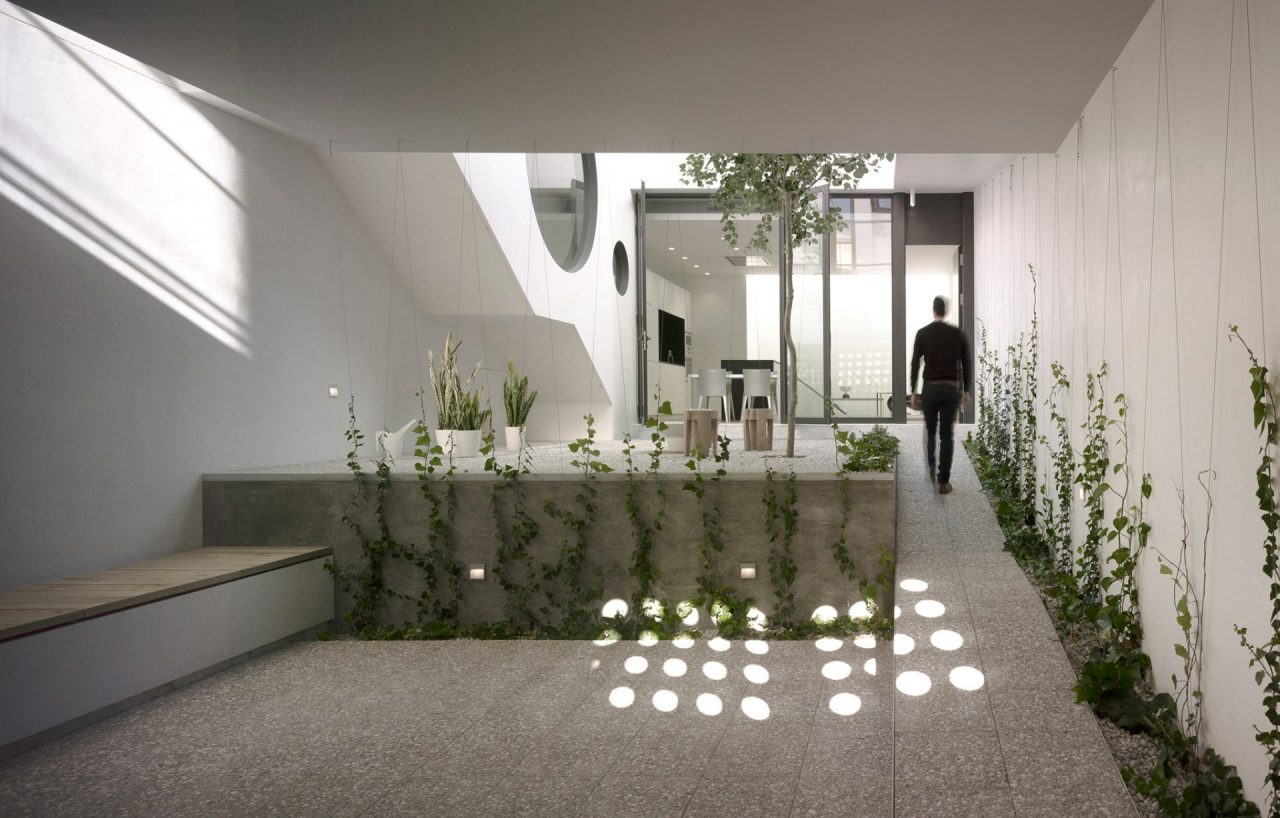 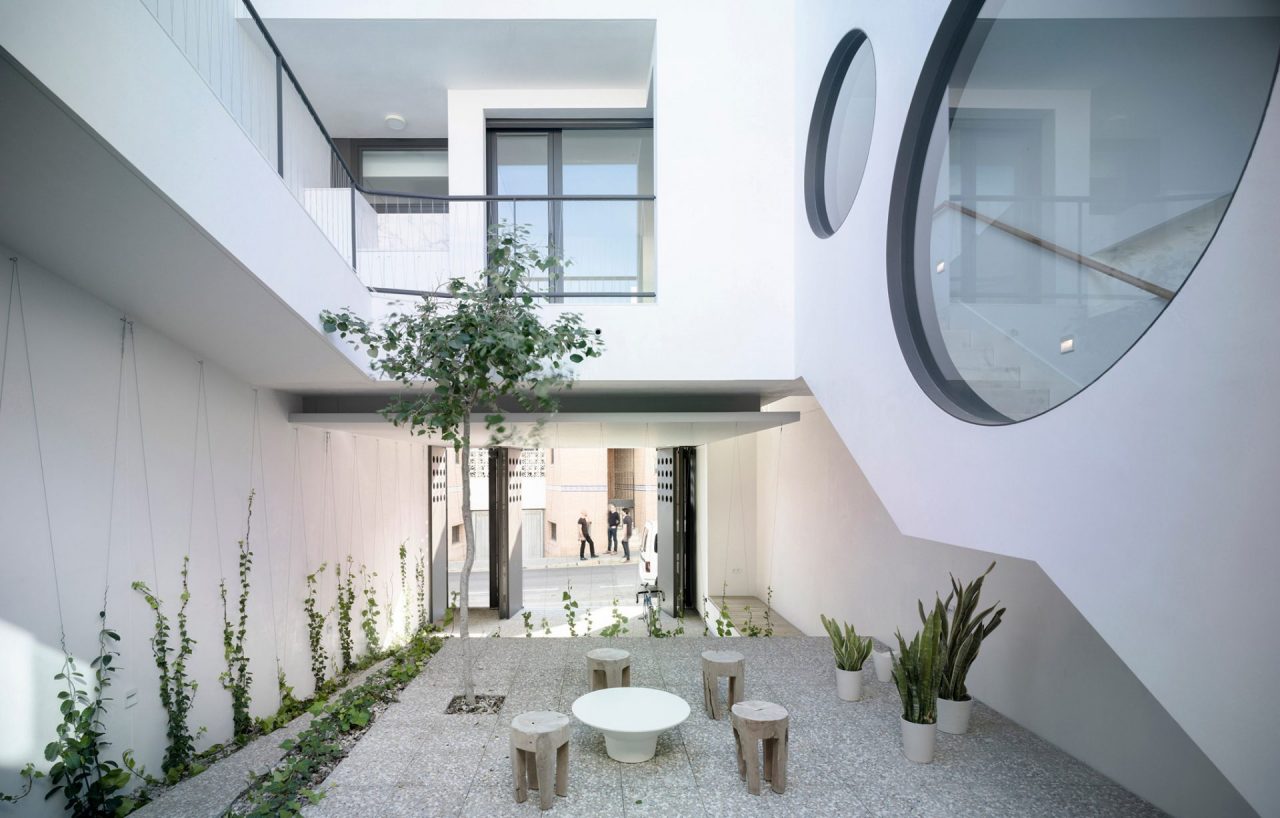 Another very important feature, easy to find in our projects is the landscape. It must be considered as “the quality of life” for people. We applied it in two projects in the same area of the previous one. The area was the low Vinalopò, they commissioned us an house and an hotel. The inhabitants of the low Vinalopò aren’t aware about the environment, they don’t appreciate the landscape. They are building roads, infrastructures that disfigure the landscape, they are alien elements for the city. For this reason, in the Chameleon house, as called by its dwellers (because it completely camouflages itself in the landscape) what we did was to contextualize it to the mountainous scenery by using the local stone, which has got the same color of the ground. Like a chameleon, the building takes the landscape’s texture. 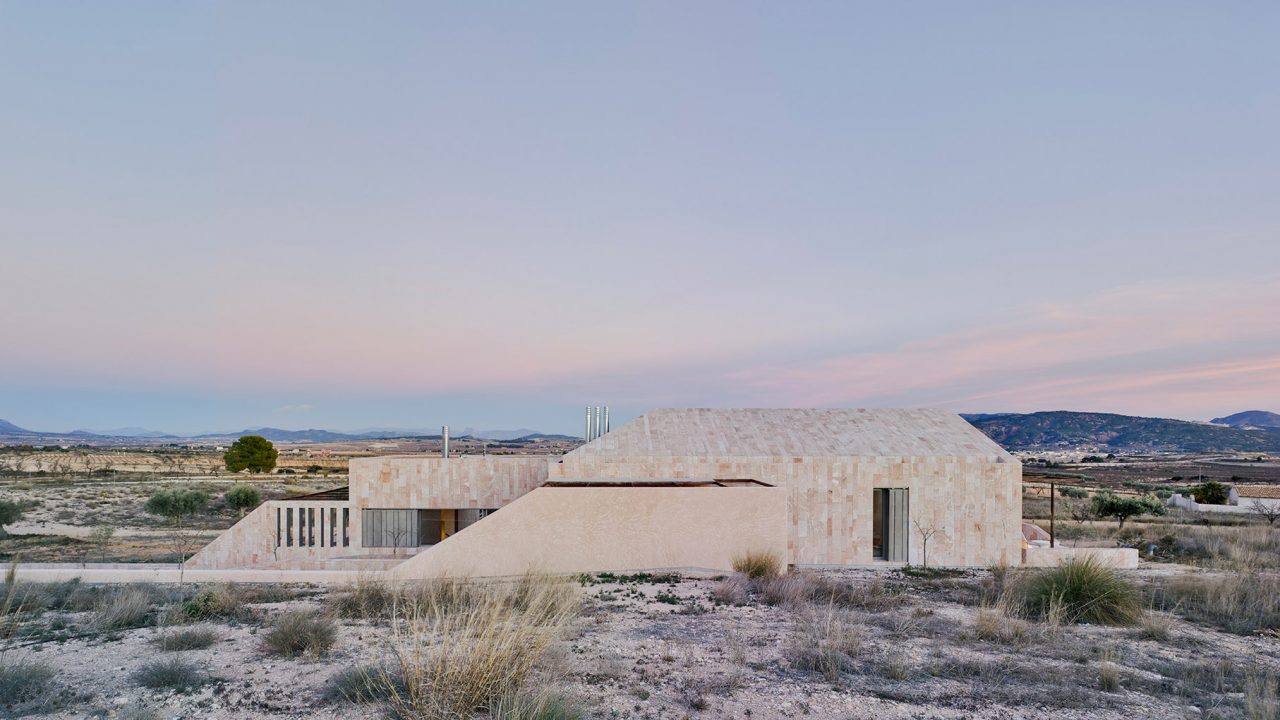 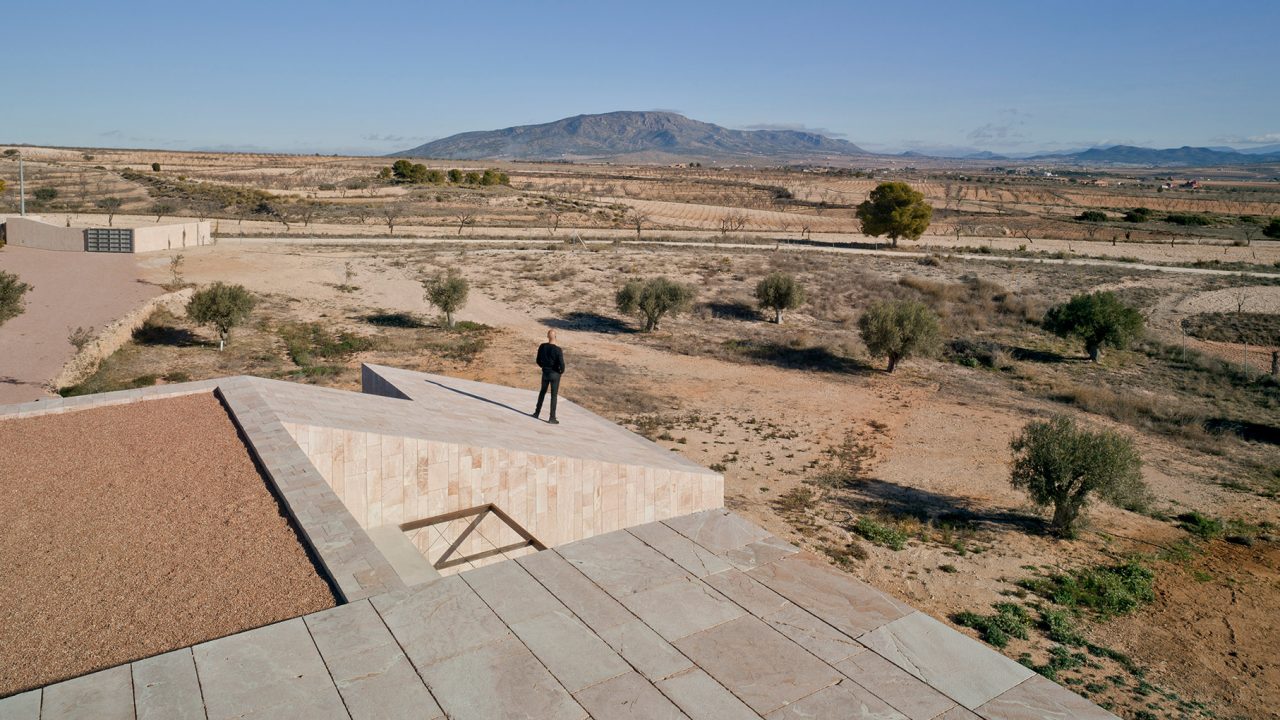 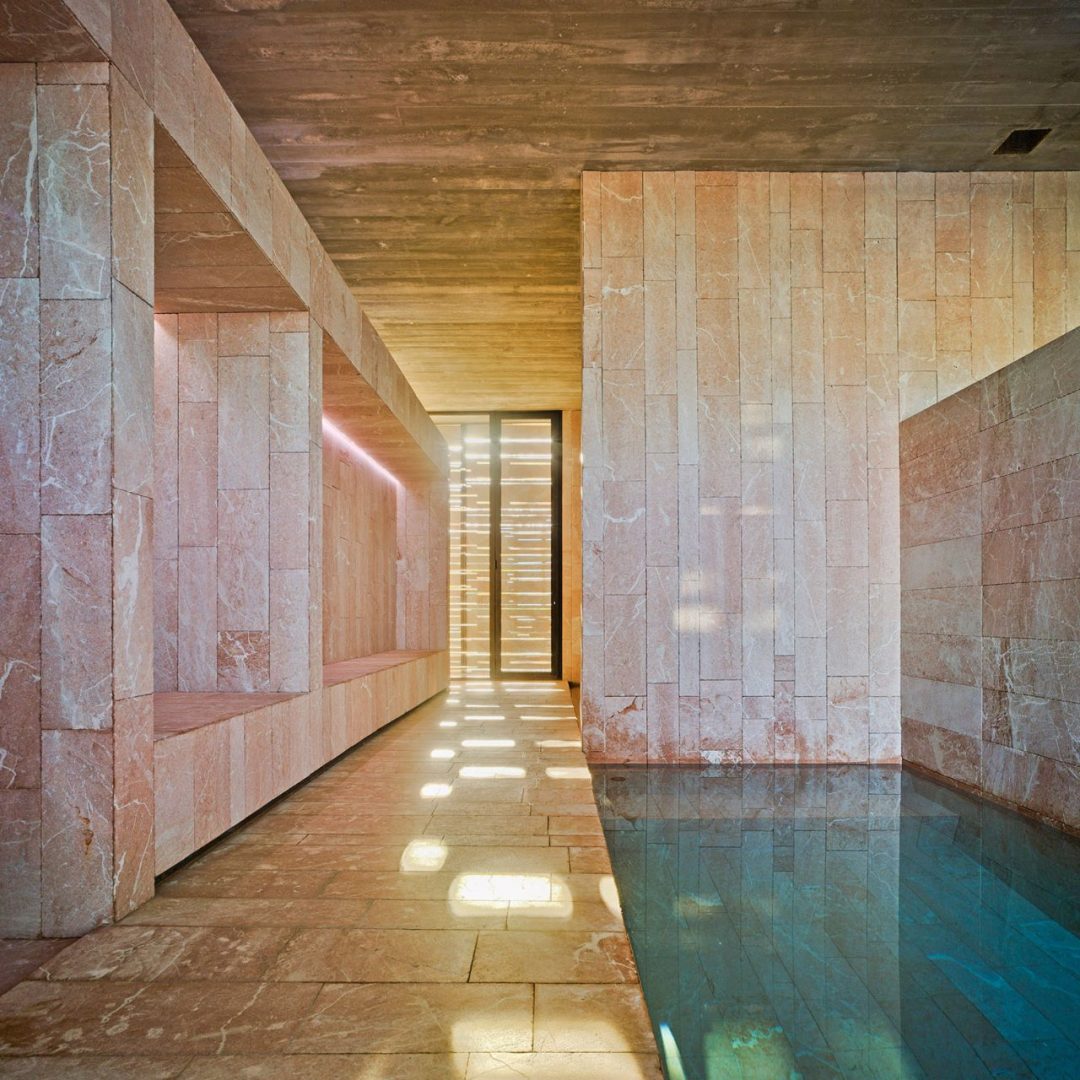 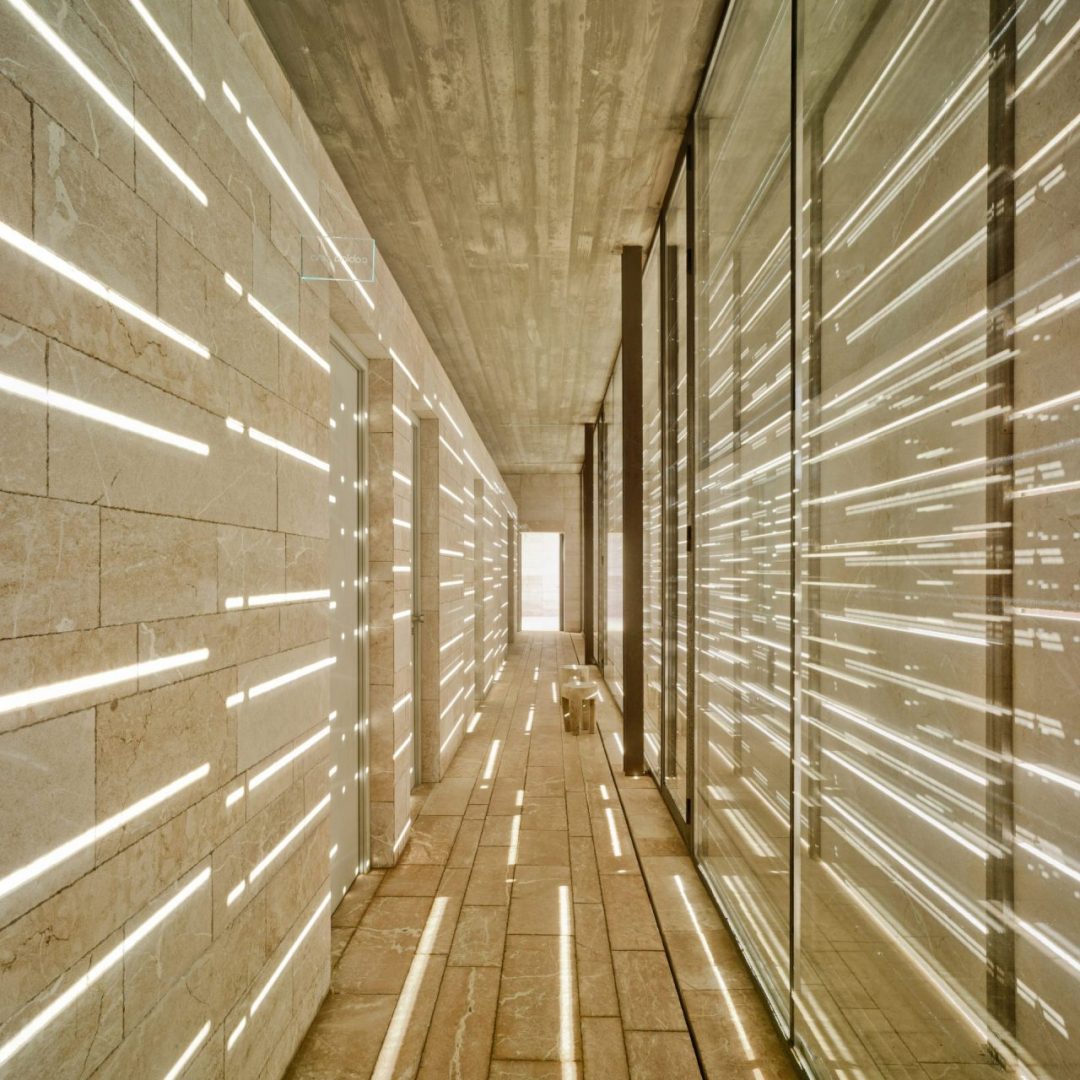 The other leitmotiv is the sustainability. The 30% of energy consumption in our planet is due to architecture that is at the same time a powerful tool in order to improve the ecosystem. For example, when they commissioned us the Edificio La Serre what we did was to design a double glass skin for the building in order to convert the space in the middle in a greenhouse that, during the winter, collects the solar heat and let it go inside. During the summer, the second skin can be opened, in order to have a terrace, protected by curtains. 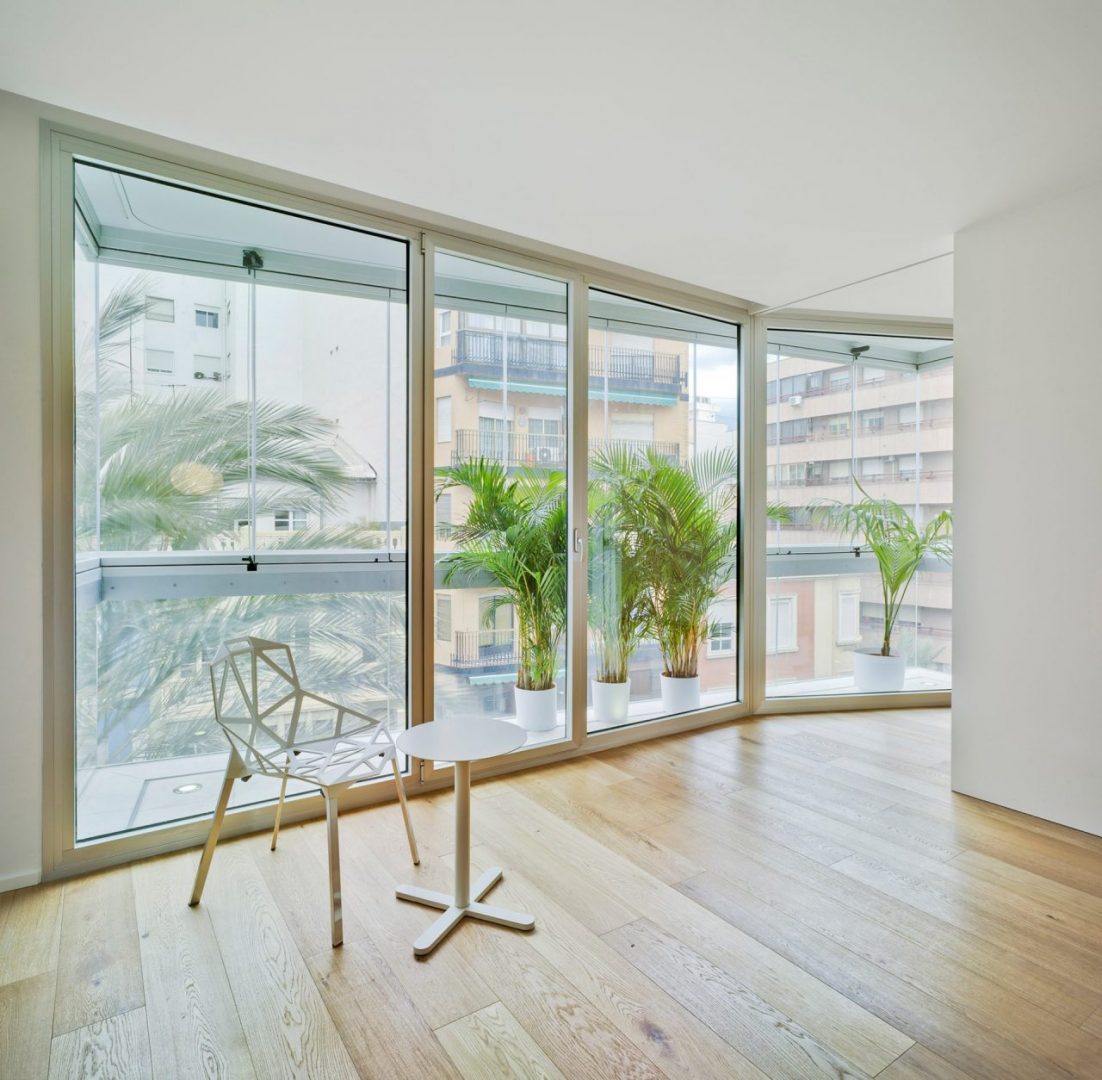 The identity is another topic that you can find in the Antigua Estación de autobuses in Alicante; it was an abandoned and obsolete building because they already had built the new buses station. In the Seneca quarter, we got a feeling of sadness for the loss of the heart, the engine that had vitalized the quarter for a long time. When we went inside, we found a beautiful mural made by a local painter, Gastón Castello. It represented the urban plan of Alicante with all the monuments and main buildings. It was like a map for a traveler. We started to point out how many buildings still existed and we found out that most of them had disappeared. We thought it was very important to preserve the building because it was representative for our city. 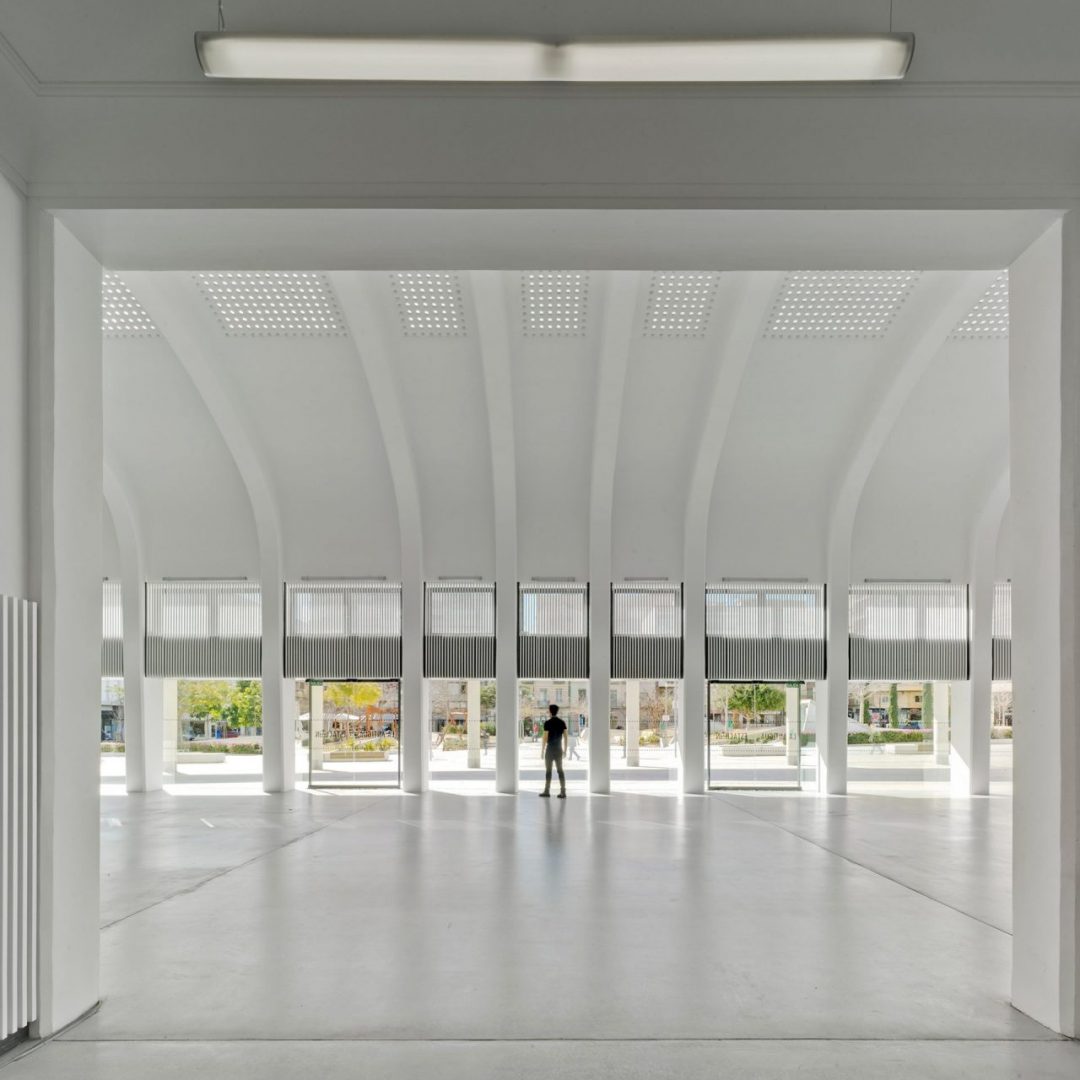 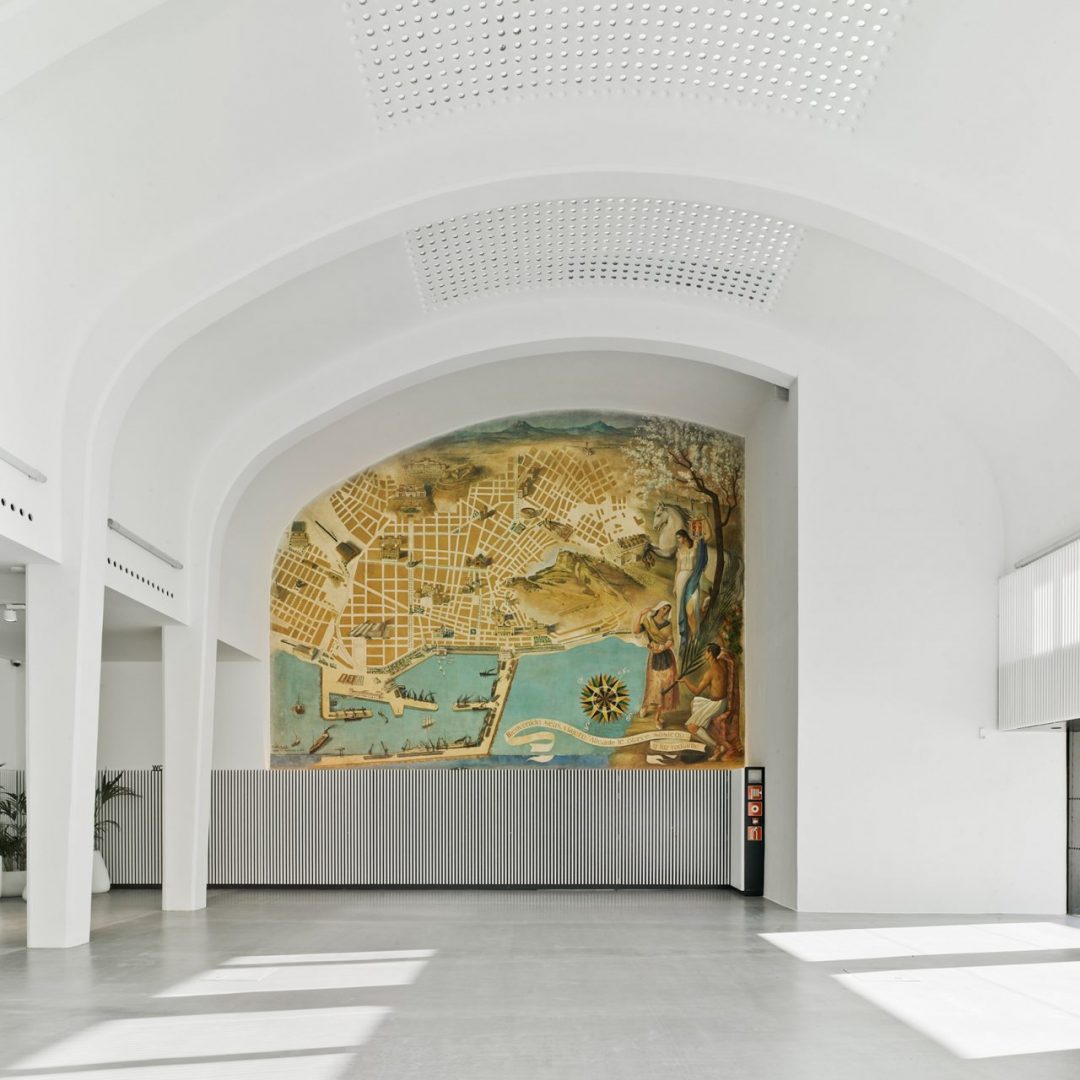 In the end, the fifth Leitmotiv is the people. Like in the project for the Congeladona shop in Elche, sometimes architecture’s aim is to improve life of the people. Even when they have to buy something. Because architecture is intimately linked to the life, to eat, to drink, to buy, to love… To love the city, the nature, the other people. 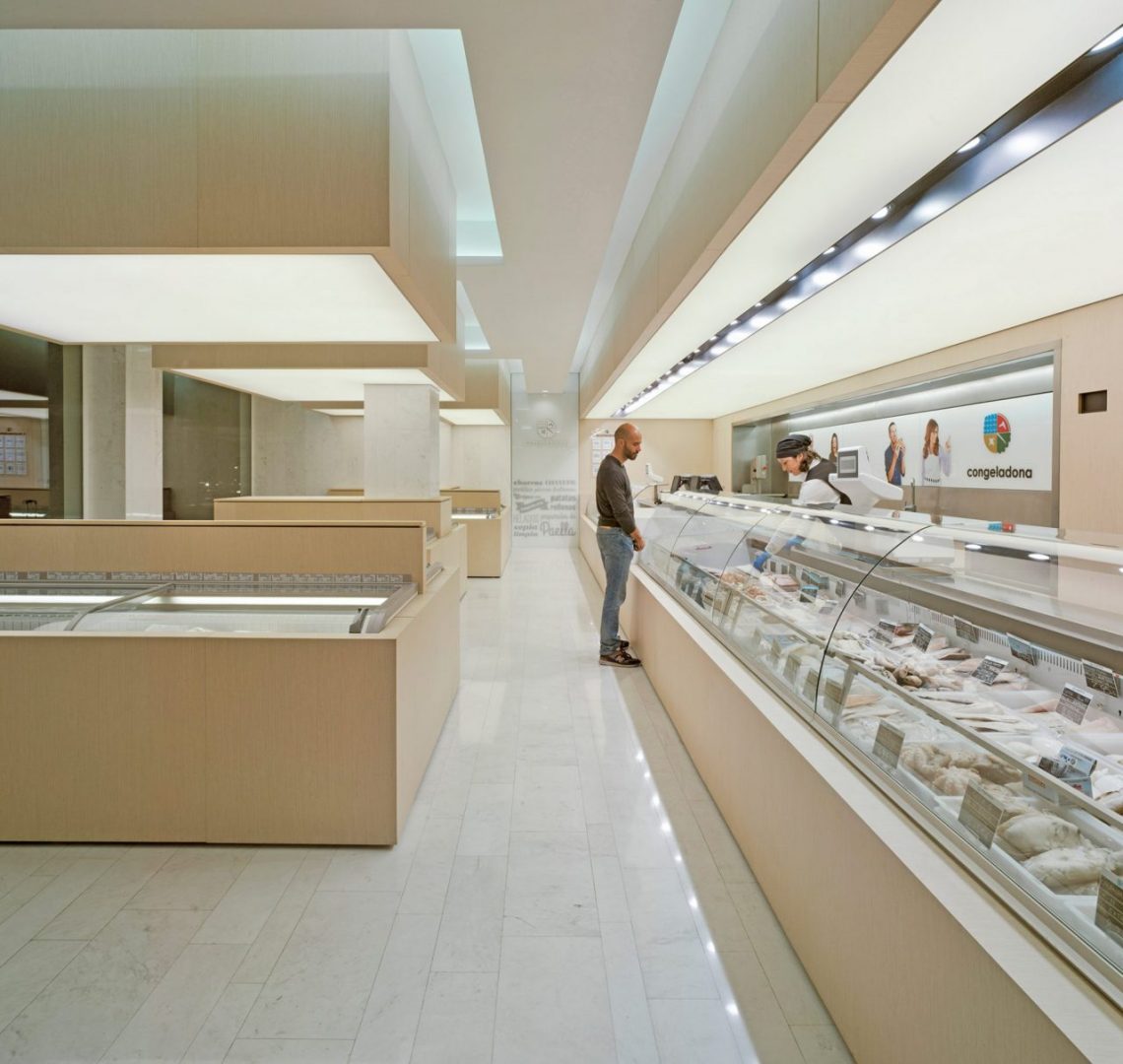 IP Arquitectos is a multidisciplinary architecture studio based in Alicante and Valencia.

The architecture studio has more than 15 years of experience in new construction projects, rehabilitation of buildings and facades, renovations, construction recycling, interior and urban design, technical and energy certificates.

IP Arquitectos is committed to an architecture at the service of people, materializing the better solution to all. IP architects are specialists in making ideas possible through a sustainable architecture, from the social, economic and environmental point of view. 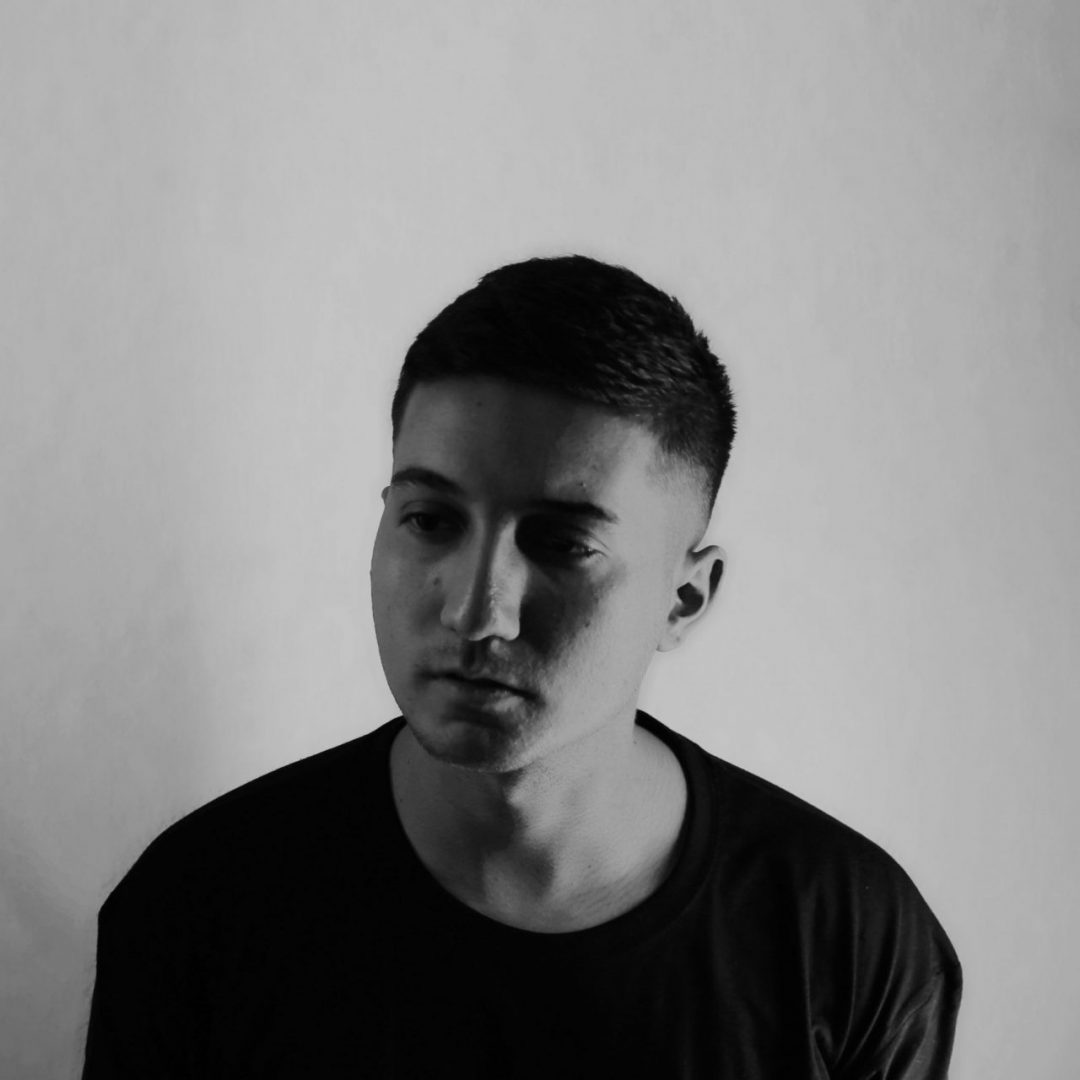 Born in 1995 in Conversano, Puglia, he graduated in architecture at the Polytechnic University of Bari in 2020 with a thesis on rural architecture in the Fujian region, China. During his academic career he studied in Spain for two years, in Cartagena first and Valencia later. In 2017 he founded C A G E Architecture. In 2021 he co-founded Nebra Skay Studio about sustainable design. 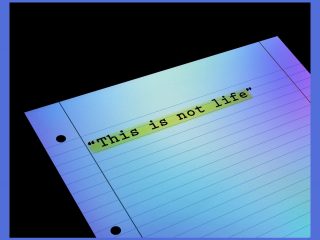 Next Project (n) This is not life