I thought that the right way to design this building was to draw and to figure out the voids in this empty mass, without touching the exteriors. I didn’t want to ruin the side of the mountain, but I did want to recall somehow the astonishing monumentality of some of the ancient buildings in Hierapolis.

So, I subtracted from this full body three dimensional volumes (spaces) that have similar shapes and similar spatiality of the ancient buildings in Hierapolis, including a tower landmark. For example, the spheric entrance hall, is taken by the S. Filippo church, that had a central space covered with a dome and it worked as main distribution space (exactly as the hall of this project).

There’re two different parts in this design, one that shows itself with elegance and strength and the other one is hiding inside the mountain.

The tower landmark is the figurative will of the travertine stone to come out again, breaking the layer of white stone, the cave has only one entrance from the side of the big path on the mountain, and another one is on the roof. These two faces of the design are volumetrically completely different, and they have also different aims.

This project is a landscape observatory, but it’s also a new important access to the ancient city of Hierapolis. I chose a tower first, to give the possibility to watch the “cotton mountain” from a special point of view, but also to allow a new view on the other important part of this area: the archaeological area of Hierapolis. Second, in the ancient time, the Domitian Gate of this city was attached to a very tall tower, that worked as a landmark and as a protective structure, and so, as in the past, a new tower will mark the entrance to Hierapolis.

I decided to locate the project at the end of the already existing path, to sign the end of something and the beginning of something else, to stress the idea of a new entrance.

The other part of the building contains the conference room and a small working area, and to enter this space, everyone must pass through the big domed-roof hall. For this other part I wanted to recall the massiveness and the monumentality of the spaces inside the ancient building in Hierapolis, but without ruining the amazing white stone wall.

I started to subtract volumes that had dimension, shapes and proportion that recall these buildings. The only exception is the entrance, that is visible in the “facade”, and it’s inspired by the big vaults of the Thermal Bath of Hierapolis. From this big hall, the visitor will directly access to the rooftop using a big stair.

The roof of the building is the new observatory, and it has a 180° wide on the entire valley without obstruction. To not ruin the view, instead of having handrails, I used some small pools to block the passage to the visitors, or to invite them to watch the valley directly from the water. The pools are disposed in this to enhance the only entrance to the tower landmark on the west side of the platform.

This is the building, a double-faced entity, completely different in shapes and spatiality. Monumentality is the only theme that keeps together these two sides, because I think it is what Pamukkale and Hierapolis need and deserve.

Michele Marini graduated in April 2017 at Politecnico di Milano with a thesis called “From Fragments to the City – Digging in the Past of Xi’an: Design Enhancement for UNESCO Small Wild Goose Pagoda Area and Anren Fang”. He previously obtained a chinese master degree at the Xi’an University of Architecture and Technology in 2016. He is actually cooperating with GAP Gruppo Associato Paterlini office in Brescia and he is working as assistent for Design Studio at Politecnico di Milano. 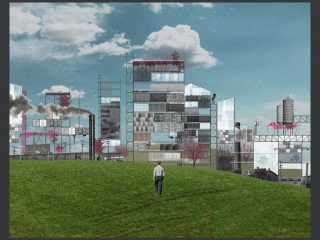 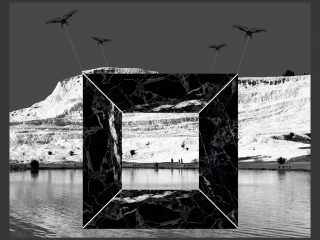