The history of Tour d’Aigues’ castle has unfolded around the permanent figure of its fortifications, while the impermanence of its uses has continued to evolve. Military building, seigneurial residence, the castle reduced to ashes becomes a place of popular occupation during the “revolution : stone quarry, agricultural depot and place of celebration; before its patrimonial classification opens its treasures to the public. However, past fortifications remain today only a thin fence drawn by the thickness of the stone. The gesture undertaken therefore comes from a paradox. 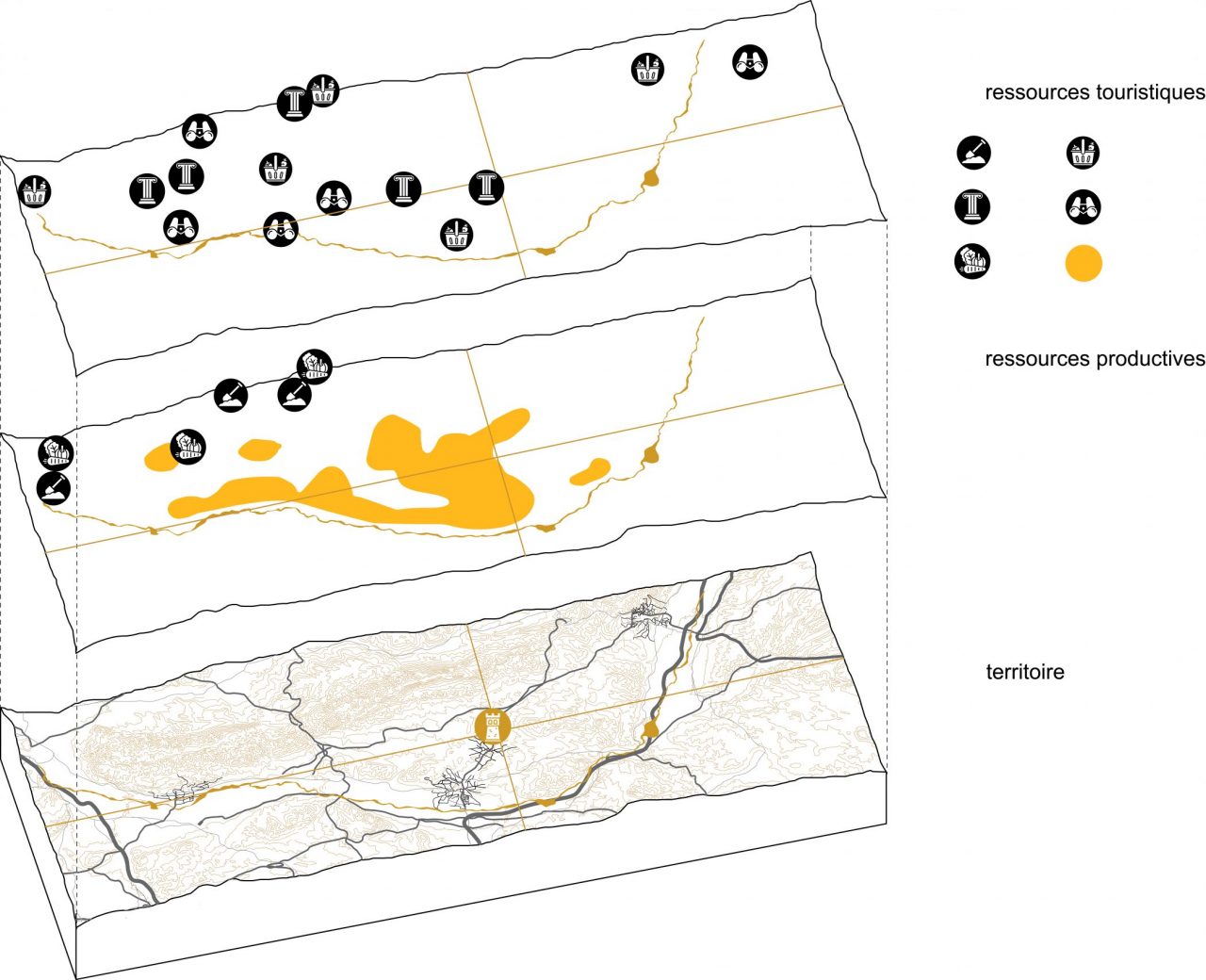 Rebuilding a wall to better open the site on its territory. “Pied-de-nez” of the fortified castle’s archetype, this reconstituted thickness dreams of being permeable, a pretext for the reactivation of the void by the fullness. Fromf the old to newness. From heritage by innovation. The “luberon” can draw from its “terroir” the opportunity to rally its cultural heritage, its ecological ambitions to its desire for innovation. In the form of a circuit around its heritage, the new enclosure stages an educational cycle around the “arts de table”: awareness, production, tasting and reconversion. 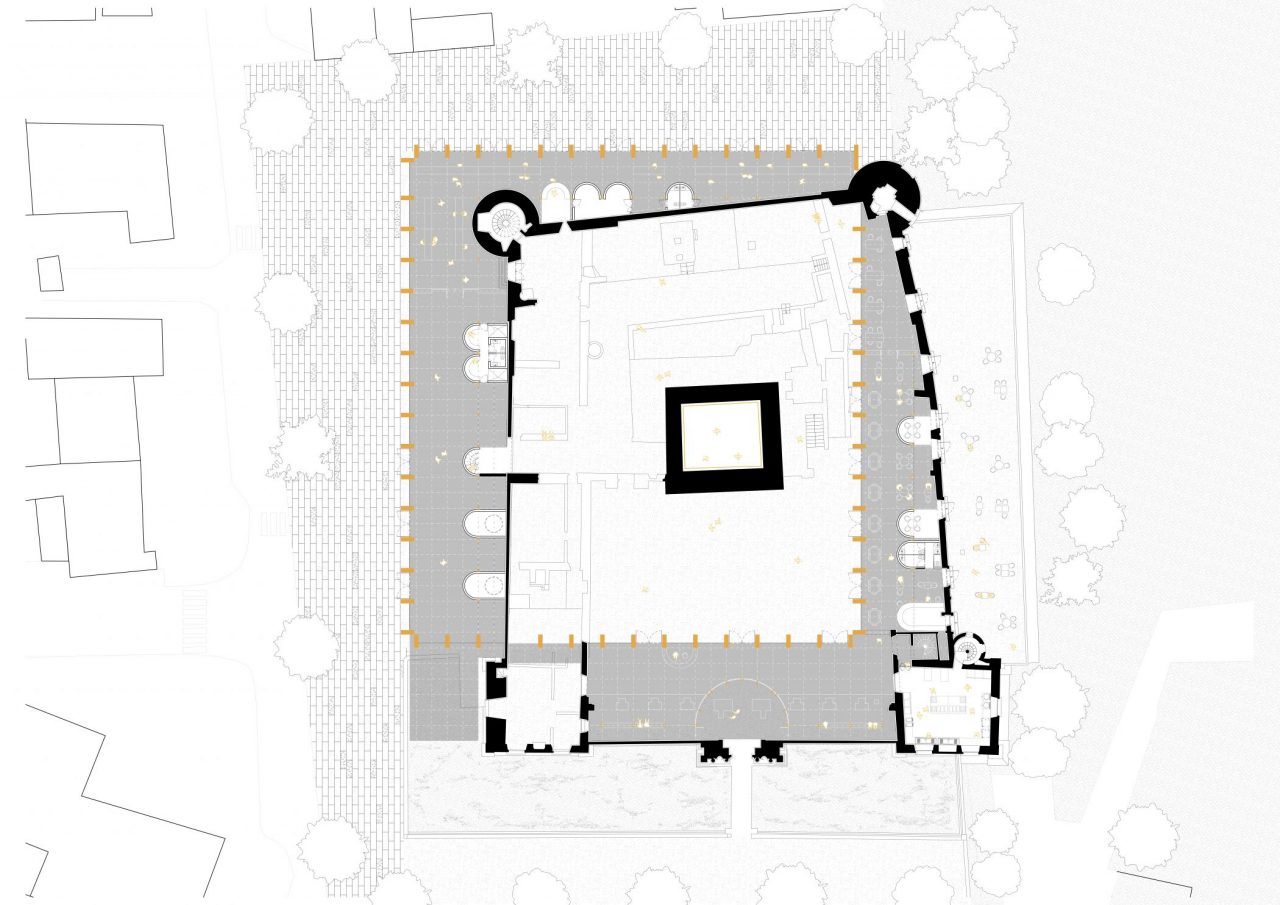 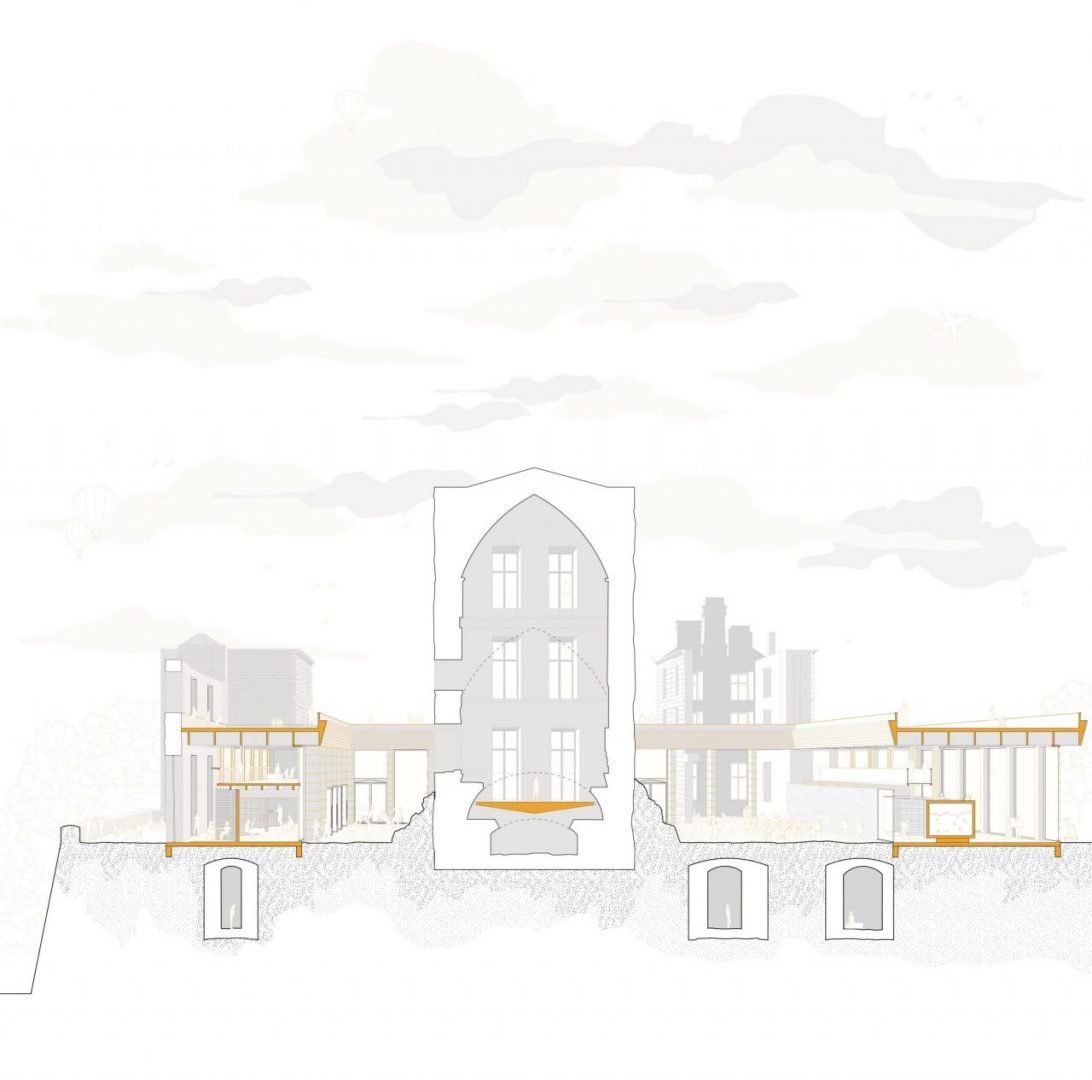 The tourist information office is located against the entrance gate, articulating the different programs. An educational path develops on three levels between the cellars, the reception and the mezzanine. The covered market opens on the square to the north, displaying its local merchants on this belvedere in the summer. The restaurant takes position against the existing terrace, making the link with the central courtyard. 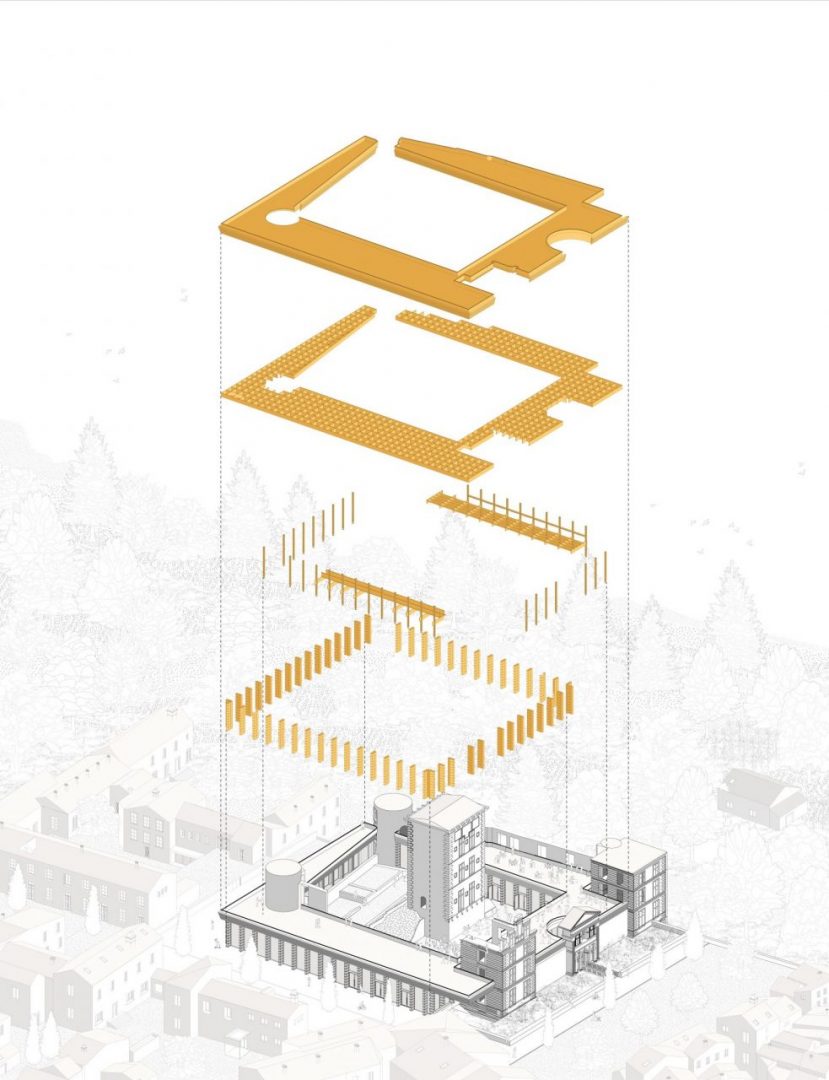 Lastly, a pioneering and militant methanisation unit for wine waste is created against the main street, like a showcase for the castle. Accessible to local producers, this virtuous cycle transforms wine lees into biogas and fertilizers, a reminder of the site’s productive past after the revolution. By reinterpreting the plan of the castle, the extension accentuates its figure in a thickened frame and thus offers two faces of the ruins. An extrovert one turned towards the territory, its resources and its population. Then, an introvert one, in the form of a “hortus conclusus” dominated by the tower, preserved in condition, with the exception of a stage, allowing its discovery. 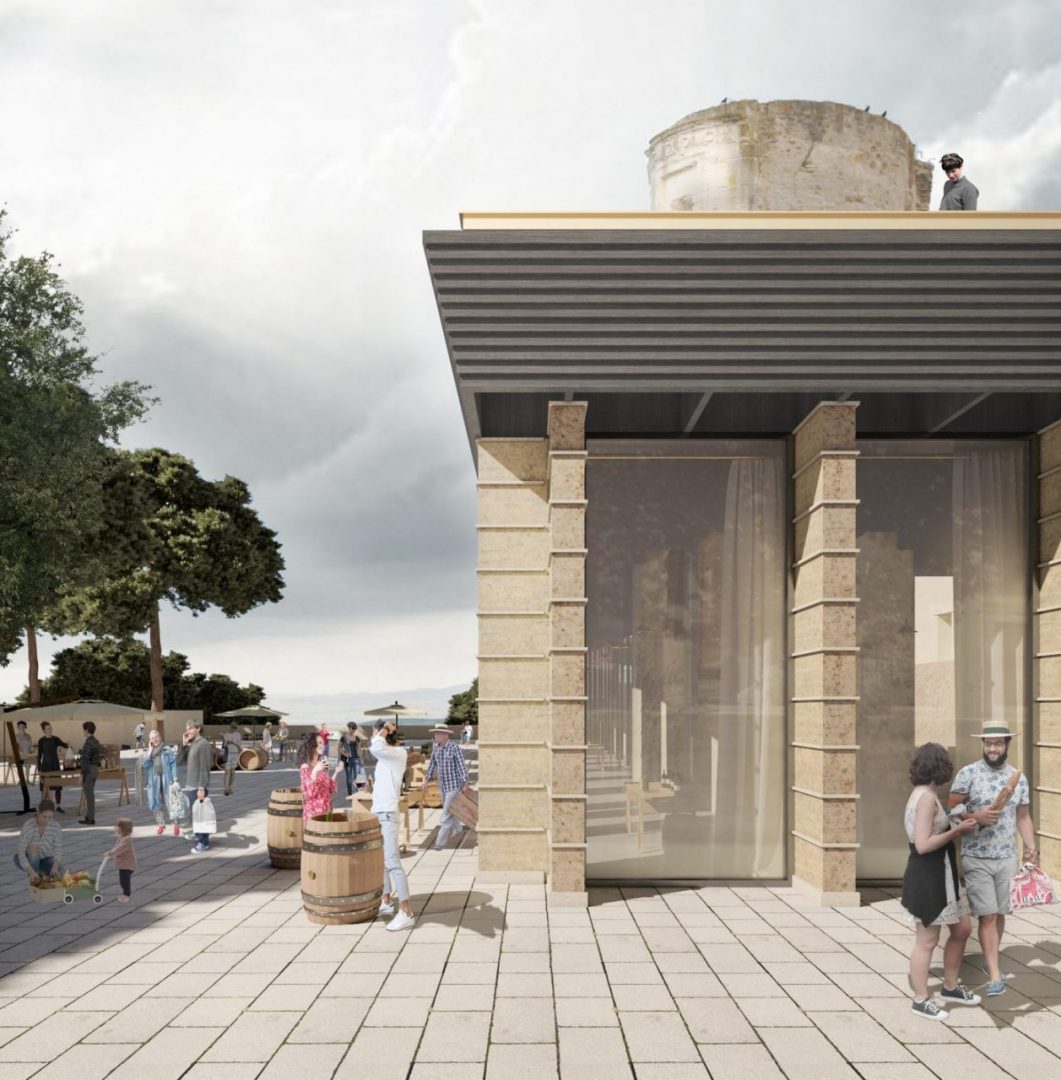 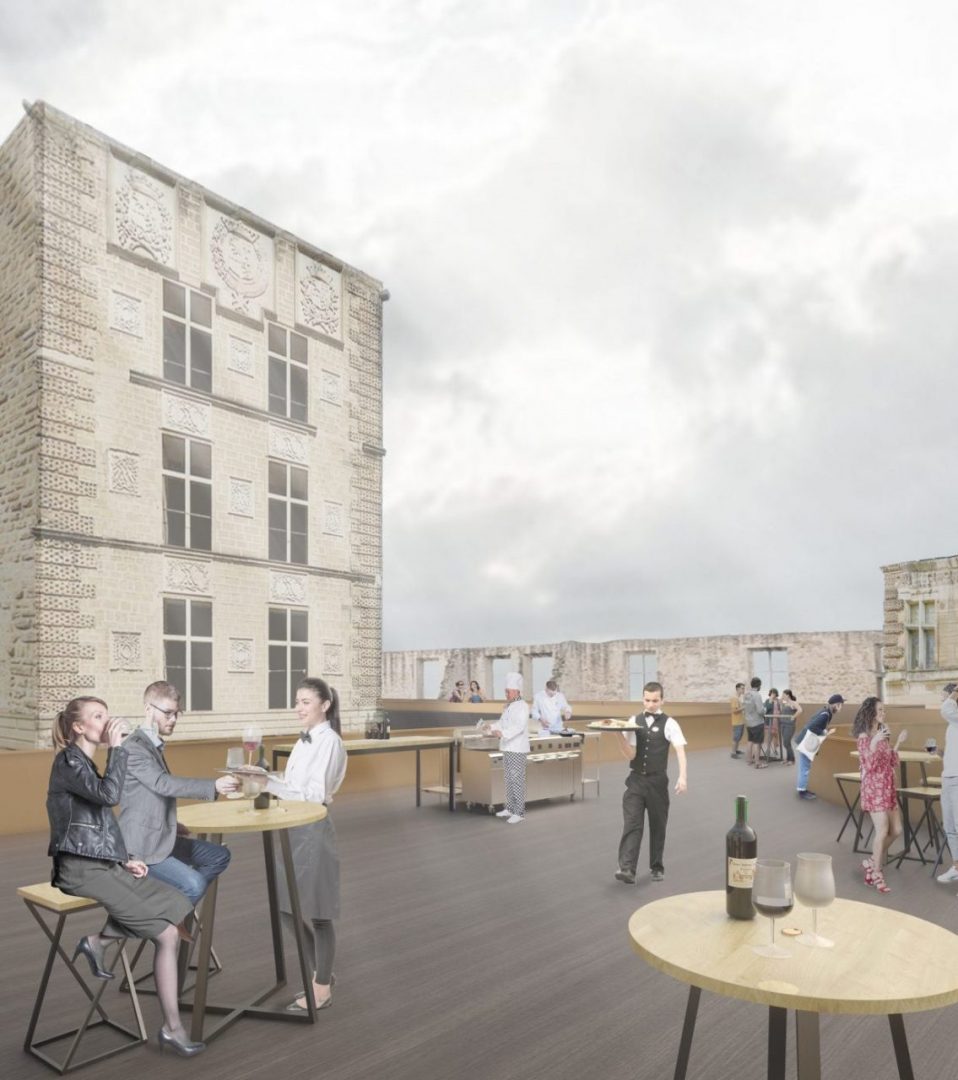 This garden of ruins offers a place to stroll in the heart of the history of the site towards its new fortification. the construction of this restored thickness revives the identity of artisanal know-how in this landscape of ocher lands. it is precisely from this earth that the reinterpretation of the site and its heritage comes for virtuous purposes. available in a structure of raw earth and in its ceramic form, this ecological and social approach fits fully into its territory and its population. created by the association of the “village” (cavaillon), which works by reinsertion into the manufacture of local earth bricks ; this choice is also a tribute to the “porcelaine d’apt” and the museums housed in the cellars’s castle. 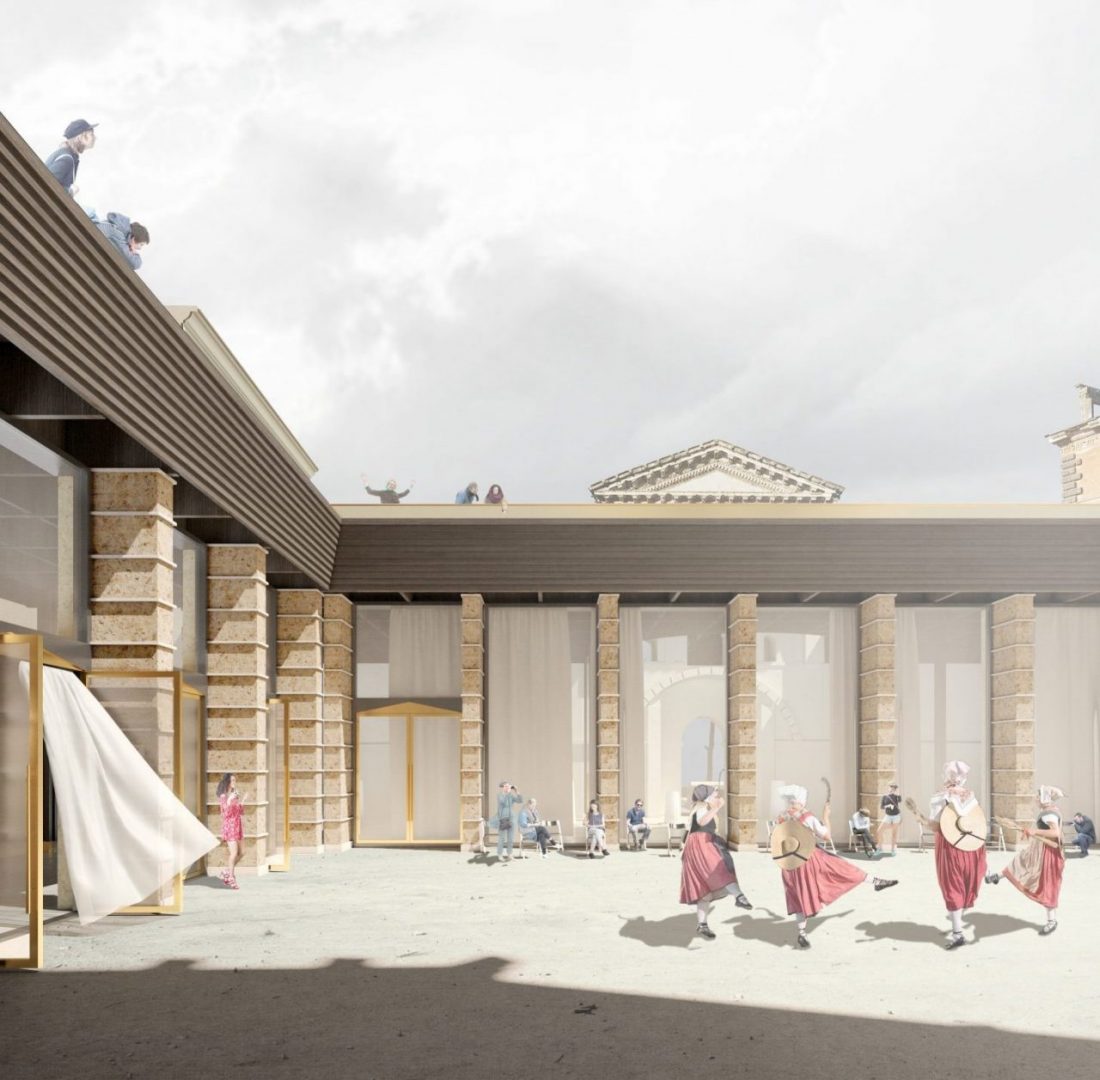 Completing this confrontation of stone and earth, of new and old, of perennial and impermanence, a belvedere reinterpreted in the original form of the castle allows visitors to dive into the ruins, the village and the luberon landscape. 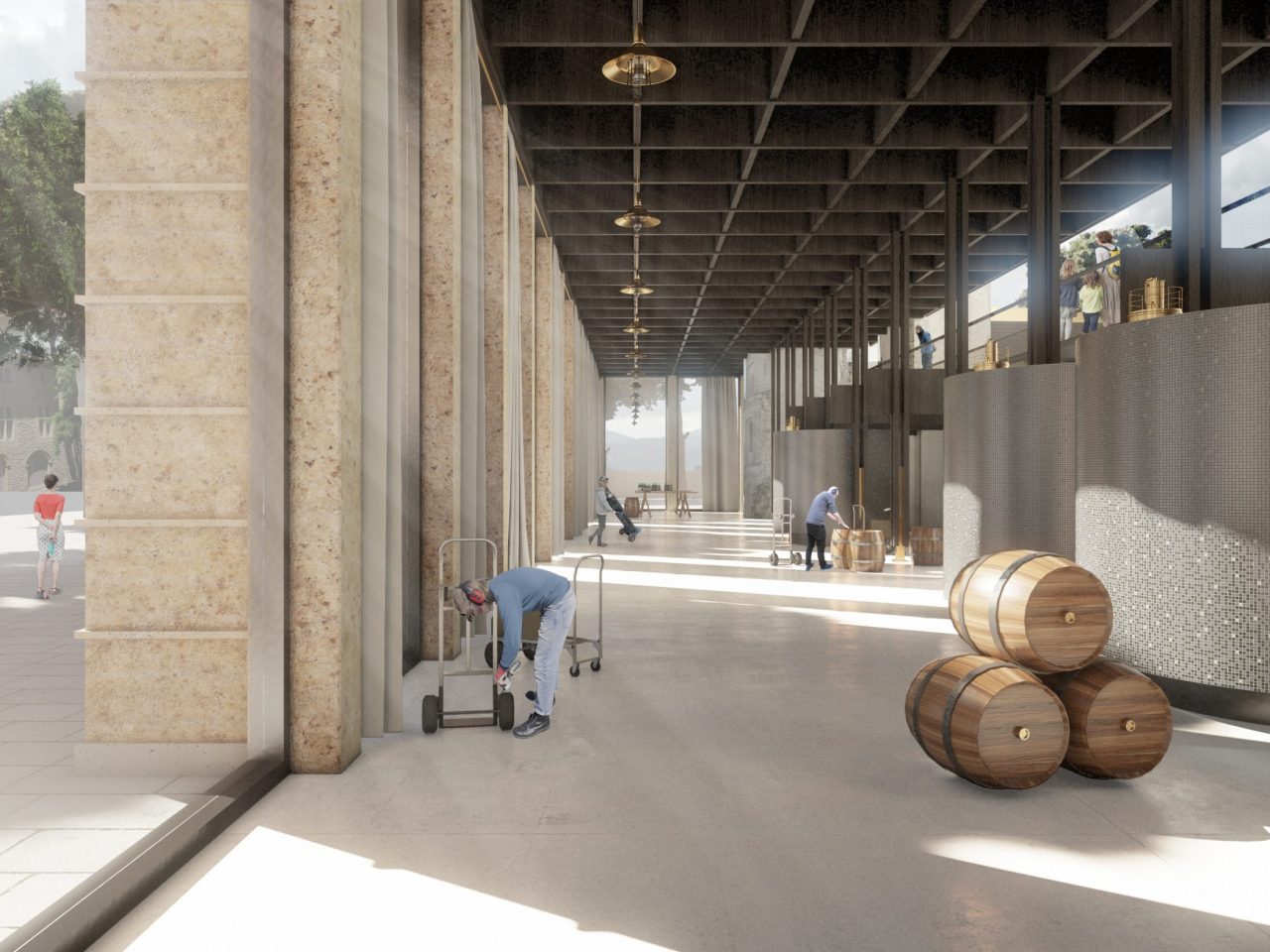 Meghane and Pierre are two young architects since two years. They graduated at the Clermont-Ferrand school of architecture. They maintain rigor in architectural design and above all they are interested in themes such as political, economic and geographic.

They partecipate to competitions to confront themselves and provide an answer to problems related to their daily lives. 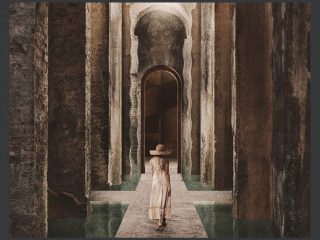