In 2019, the United Nations sued Virgil Abloh because he used their logo in the invitation flayers for some of his concerts, with no copyright.

Abloh explained that there was no reason why he should remove that logo.

This episode defines very well – if ‘define’ is the right word – what Virgil Abloh was. What he will be, or what he bequeathed to an entire generation of creatives consists in the domino effect that he generated.

It’s known that Abloh himself found it hard to define himself as a designer: his interdisciplinarity was his signature, capable of citing everything together as in a social blender and then putting it in “quotes” giving a further reading plan to what he designed.

The indefiniteness of his figure is the most modern and sincere definition of today’s designer. 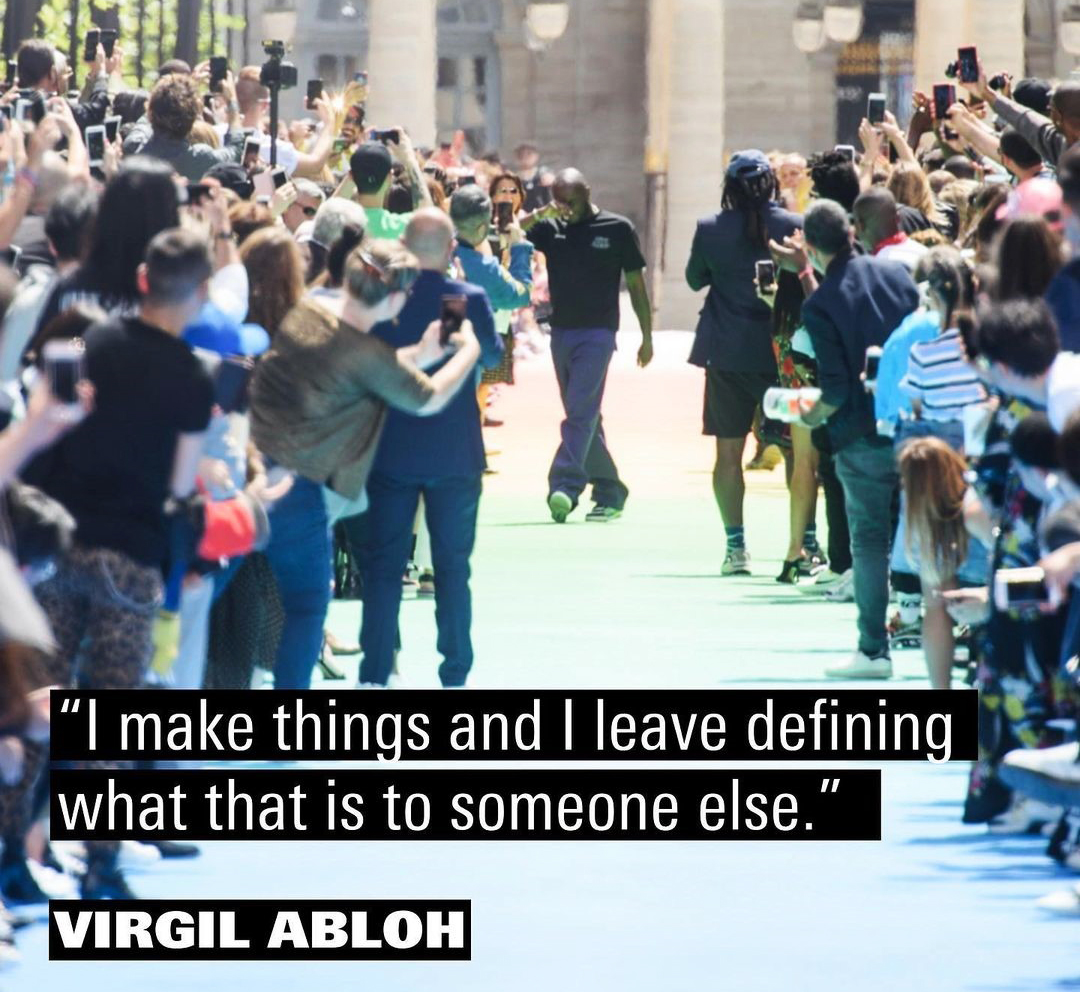 One of the philosophies at the base of Virgil Abloh creative process is that of copy-paste culture. Thanks to him, we also manage social media as a continuous mood board to draw from or to invent.

This concept, which naturally inhabits every creative process, has never been a taboo for Abloh, who has never made a secret of how important influences have been for him, and how much knowing how to communicate them in a new way and with new means is one of the best style exercises you can do nowadays.

If we consider history as a cycle of courses, and if we think that design in general is a clearer and more sincere expression of the society that creates them, then the design itself is subject to historical cycles, and only by re-elaborating it can be brought back in life.

Abloh strongly demonstrated this with The Ten x Nike, or when historical industrial design brands such as the German Braun collaborated with him to give new life to iconic pieces such as BC02 Alarm clock or Braun Wandanlage.

In the lesson at XQ America, he specified what steps he follows in his creative process:

7 – Living in the new world

The process was as much deconstructivist as it was Dadaist.

First of all, there is the desire to break down the object and reassemble it, not disdaining to show writings, seams, excess fabrics, cataloguing tags. Everything is aimed to show the object at the end of the creative process leaving that fundamental margin of unfinished.

The Dadaist component in Virgil Abloh’s projects, in The Ten for example or in the collaborations with Ikea, is the “ready-made”.

Since art has stopped copying reality, reality becomes art and the viewer is invited to observe the objects as they appear, and so it is in the design of the product. And it is no coincidence that many begin to define Virgil Abloh as the precursor of Functional Art.

This is the same thing that Marcel Duchamp did with his urinal calling it Fountain: he gave it a further reading plane, extrapolating it from the natural context in which the object exists, thus the choice of an object and its communication has become what matters. It all comes down to proposing new forms of expression.

It’s no coincidence that one of Abloh’s most beautiful phrases is ‘Duchamp is my best lawyer’.

Inserting these languages, architectural, art and Street culture and merging them all together, he created a Domino Effect that involved everything, mixing the communications of otherwise distant worlds, such as Fashion and Street, Rap and Haute Couture, Design and Millennials.

It’s not clear if there was a pre-Abloh, but it’s inevitable that there will be a future: his death brought together the whole community of fashion design and not, detractors and not, considering him one of the most influential figures of American pop-culture of the last decade. 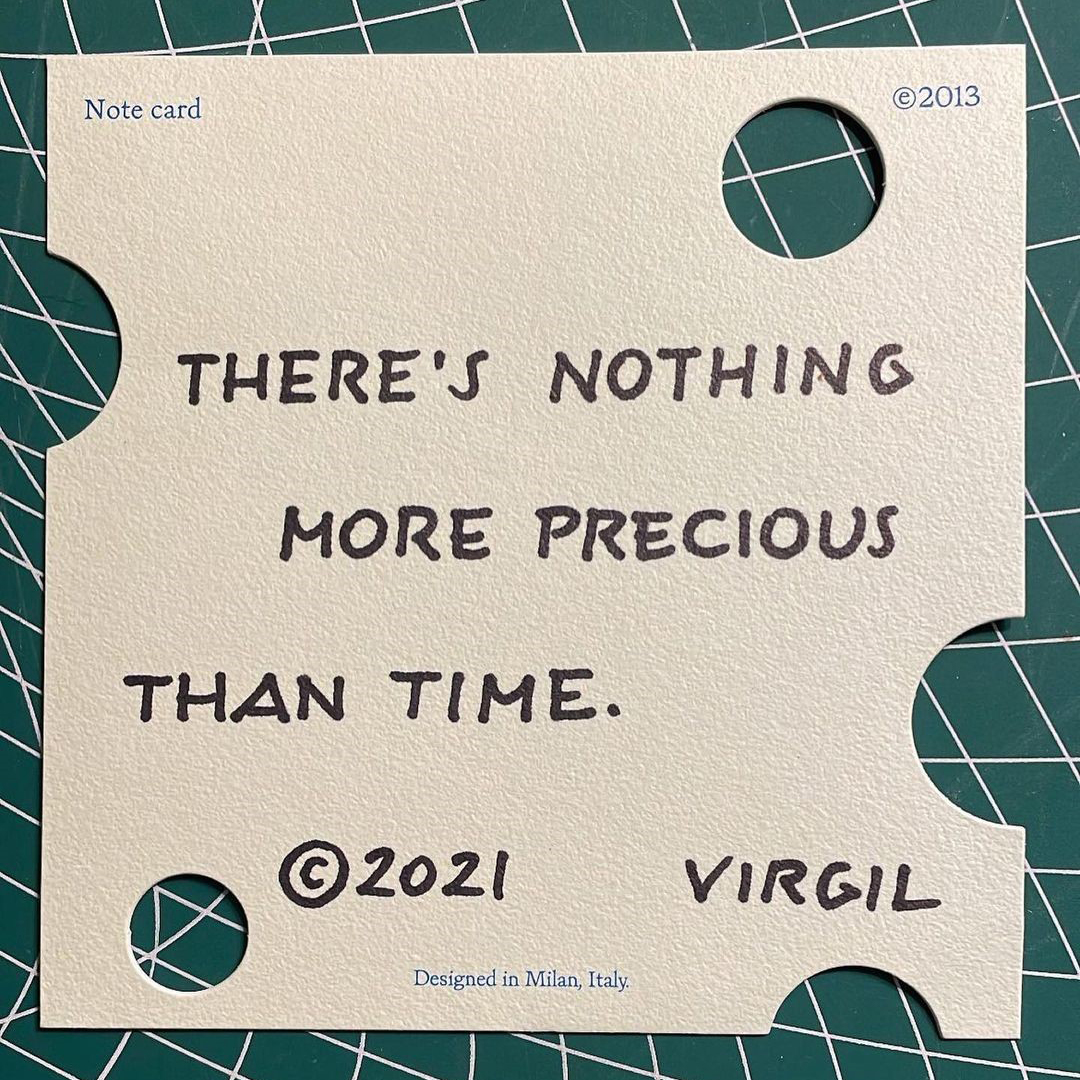 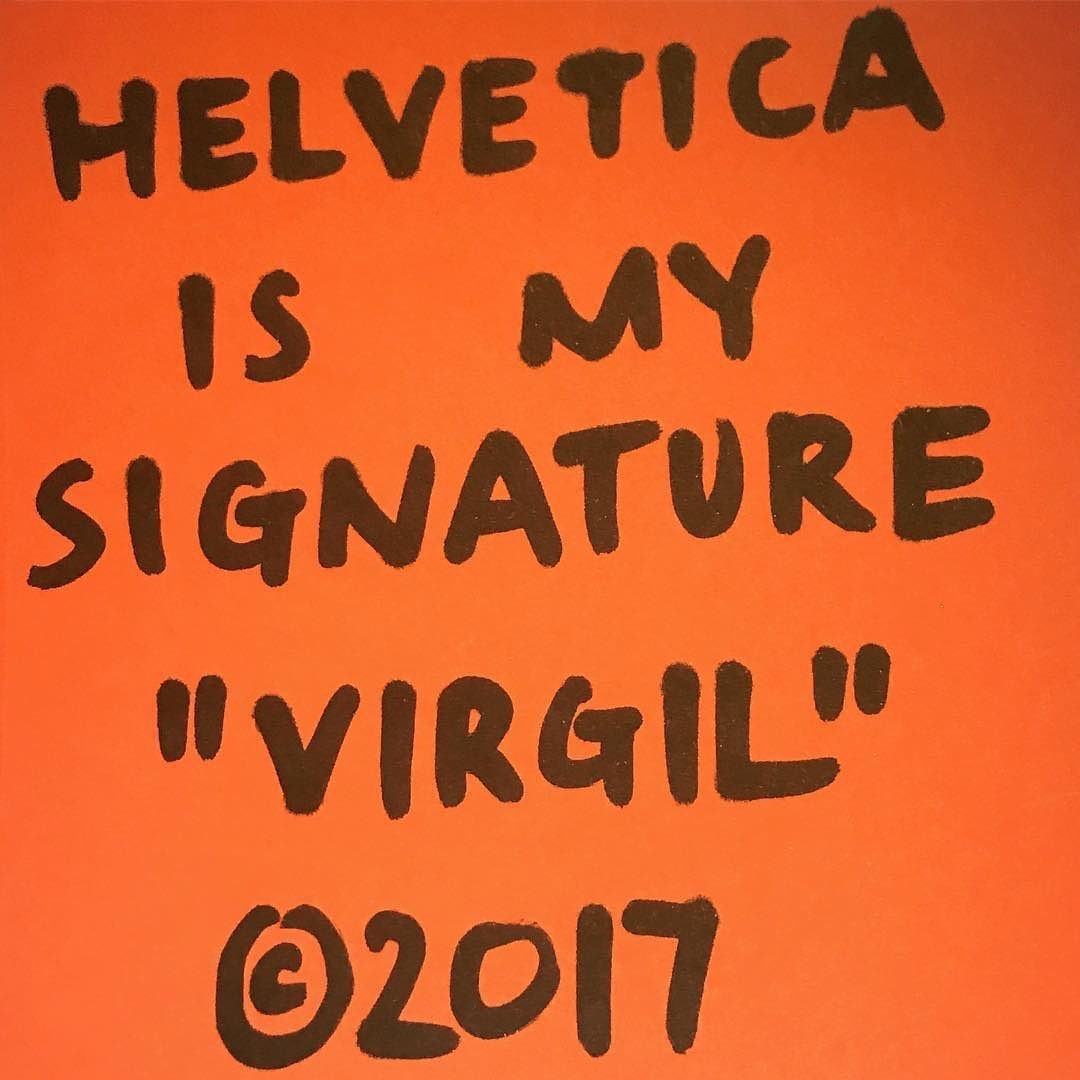 Coco Chanel said: “Fashion is like architecture, and it’s all a matter of proportions”.

This link between fashion and architecture has deep roots. The theorist Semper (mid-1800s) in The Style already theorized the Bekleidung: the world of clothing and that of architecture shared the same origin, in fact the first humans organized in nomadic societies, lived in huts and used fabrics to cover themselves both derived from animal skin.

Closer to the present day, we know how Frank Lloyd Wright designed clothes (which often matched the residences he designed), how Ferrè, the Italian architect called by Arnault to the artistic direction of Dior in 1989, redefined the canons of Parisian haute couture, and how Zaha Hadid designed shoes for Lacoste or Melissa, or the iconic Bucket Bag for Louis Vuitton.

These worlds had already merged, but on a modest and elitist scale. But with the general public? And with streetwear?

This mechanism started thanks to Kim Jones, one of Virgil Abloh’s mentors, proponent of the Vuitton-Supreme and Dior-Jordan collaborations, who paved the way for the numerous collaborations that have been born and that will be born between these two worlds. Kid Cudi, Playboy Carti, visions of street culture, prints, graffiti, and, perhaps more importantly, quotes like that of the Zoo Suit: all these elements were brought in a fashion show of the prince of French haute couture, namely Louis Vuitton, or Baldwain’s essay, Strange in the Village in the FF2020 / 2021 fashion show, or the majestic black panthers logo on the back of a jacket in the latest posthumous Virgil was here 2021/2022 fashion show.

Virgil Abloh gived viewers small inputs to allow them to deepen some pieces of black history that not everyone knows, and which certainly create a very important precedent, being one of the richest and most important European fashion houses. 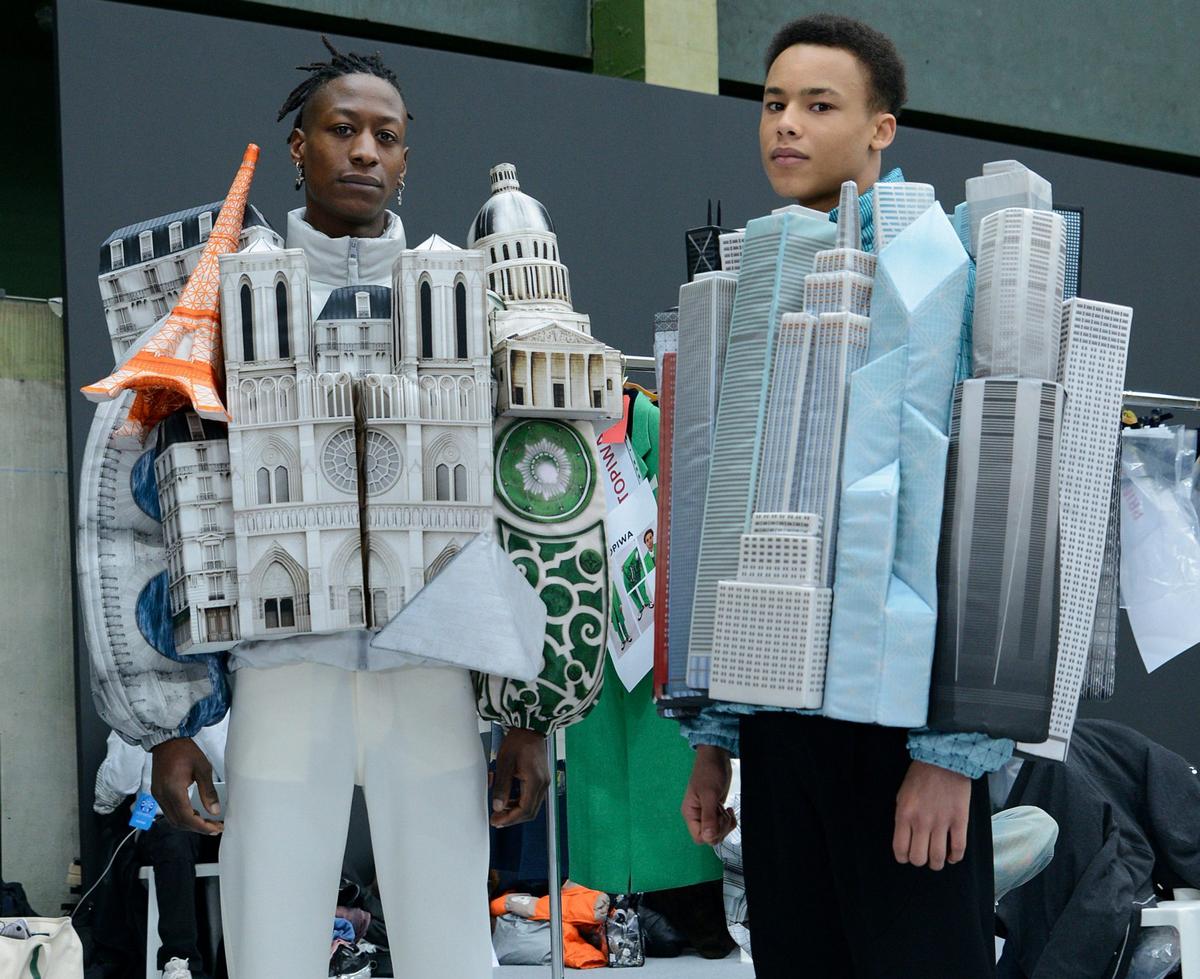 The domino effect is evident, from the big fashion houses looking for more or less fleeting collaborations with streetwear, to newborn brands that adopt the same expressive languages or the same practical solutions, up to the obvious and inexorable careful study of the “phenomenon Abloh”.

If today the boundaries between architecture, fashion, design and music are so close, we also owe it a little to him.

If today we find it useless and stale to define our own project, it’s also thanks to an architect, who drags streetwear to Paris, and hear how this last sentence already sounds like a manifesto.

There is always another way to do things.

The domino has started. 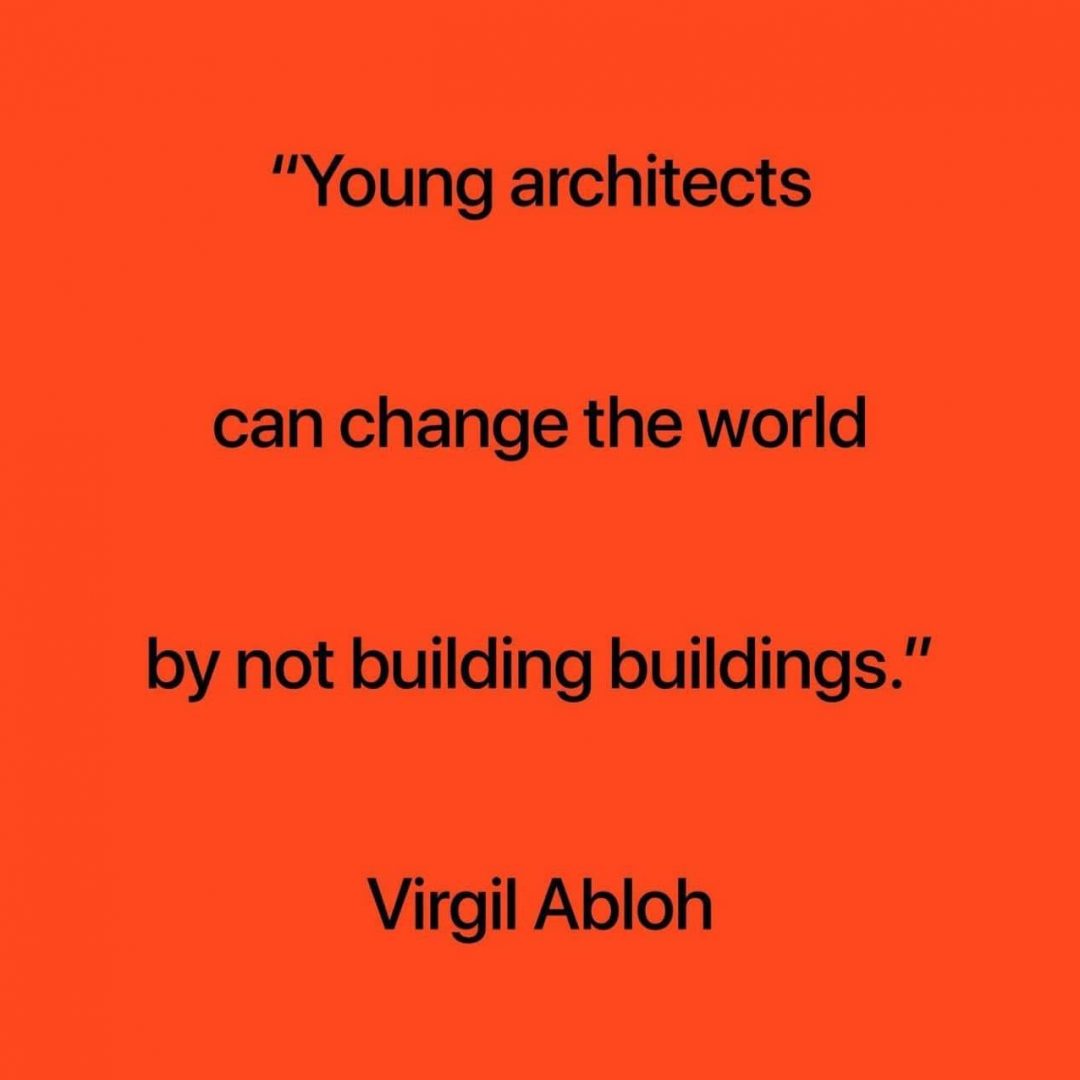 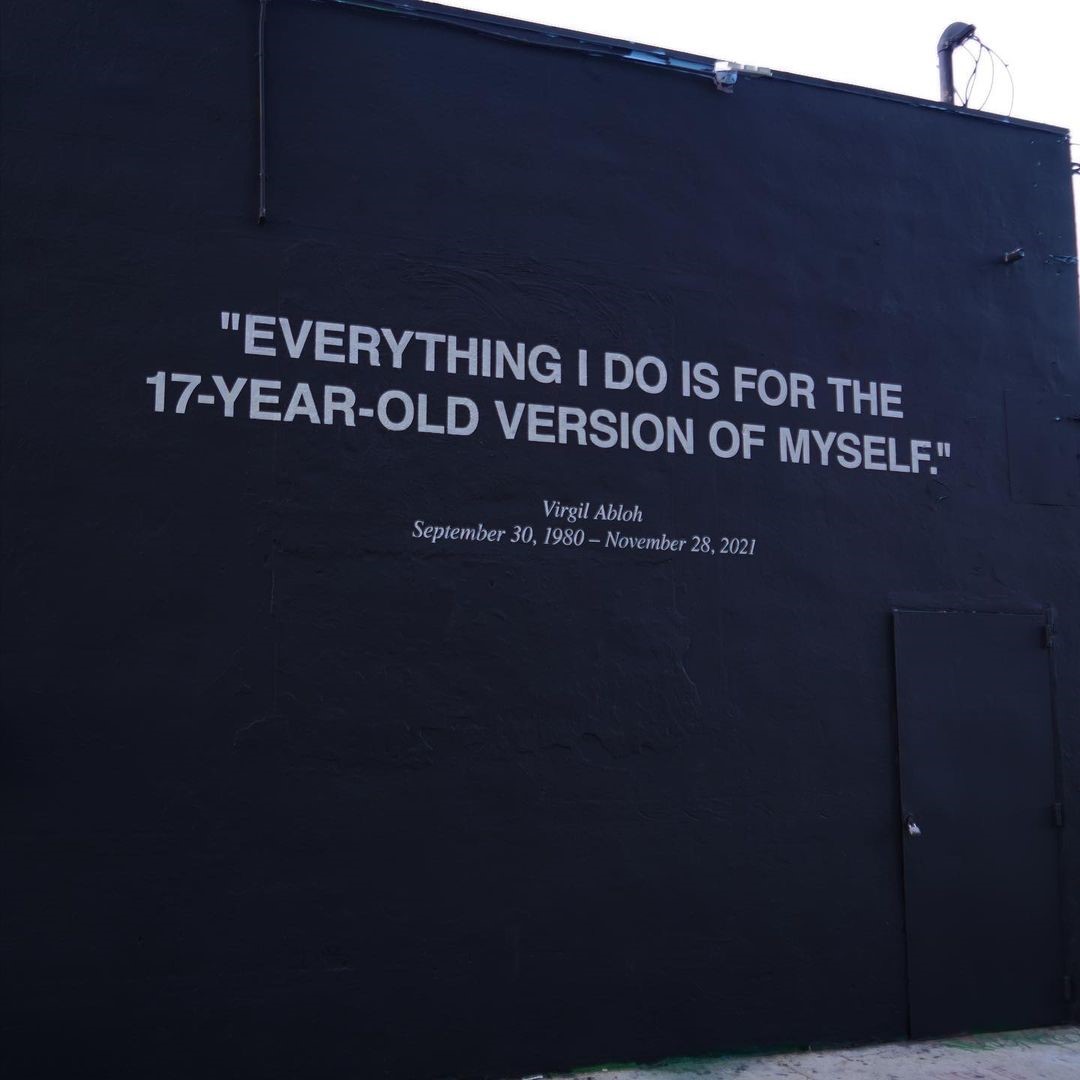 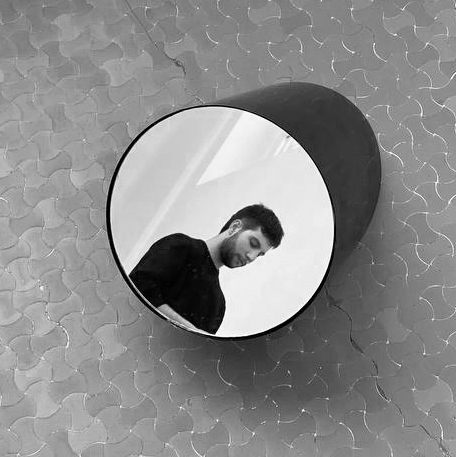 About the future
Load More 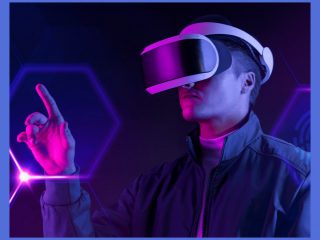