We understand access to public space and celebration as an inalienable right of society. But, what kind of party do we expect in the post-COVID world? Is it right to claim an activity, which starting point is agglomeration and appropriation of public space? And even more important, what is the party we want in the immediate future, where environmentalism, hyperconnectivity, and automation of production processes are going to mark the political agenda?

In the mid-70s, The Warehouse opened its doors at 555 West Adams in Chicago, sowing the seeds of what we know nowadays as house music: a fast music style for the dancefloor. Completely integrated into the most commercial pop, it was present on almost every chart in the early and mid-2000s. House music at that time conveyed no political message of any kind.

The beginning of house music, however, had much more severe implications. When The Warehouse opened, they were looking for a different way of understanding the nightclub – rather than a new musical style-, they were trying to find a less white and less heterosexual version of the disco that one could find in the 70s Chicago. Thus, it ended up reaching great popularity as a meeting place for the black and Latin gay community, which, at that time, was not wholly -and continues without being- understood by the white-middle-class. This club was revealed as a space in which people could be with other people of their same gender, without having to ‘meet’ specifically to have sex.

The African American community popularized the ‘block parties’ during the 1970s, using the ghettoization of their neighborhoods to organize festive spaces, given that they were usually marginalized from the white spaces. The same happened with Latin music and Latin communities in North America, first bypassed from the big circuits and then commercialized and popularized globally, serving as a vehicle for racial pride. In the late 1980s, with the arrival of house music in Europe, raves and clandestine parties in abandoned factories -after the mining strikes- and in open rural spaces on the periphery, became popular in northern Britain, in response to the ‘stuffy ‘nightlife in which a whole generation of young people had no place, but at the same time scandalized the conservative British society in full Thatcherism. At the end of the 60s, the ‘Stonewall Riots’ represented a turning point for the American LGTBI community, whose starting point was the New York’s Stonewall Inn, in the Greenwich Village neighborhood. 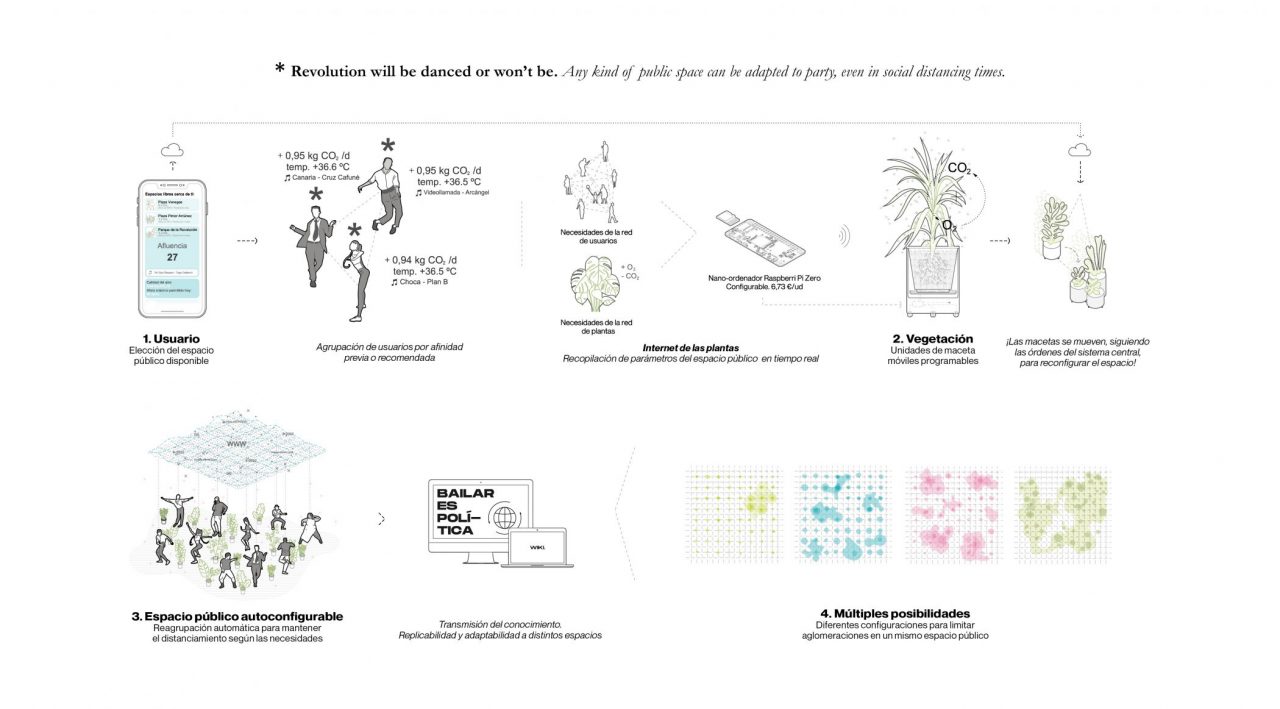 It goes without saying that there are countless cases of oppressed groups that have been forced to find their spaces in the same way, in the absence of an ‘official’ leisure model that welcomed them, the self-organized celebrations served as an escape valve, almost always repeating the same pattern through history: first ignored or repressed, then vindicated, and later becoming models to large-scale popular movements. These popular self-made festivities of any kind have been throughout history a legit way for the reaffirmation of the community identities of any size and nature, making the occupation of public space for the celebration an essential tool of visibility and a significant cause of progress and development.

It is not unreasonable to affirm that ‘the party,’ specially that one discordant with the established leisure model, has always been a powerful tool of protest and claim for rights and public spaces. That is why we must find a way to guarantee a party model compatible with a delicate social and sanitary situation. 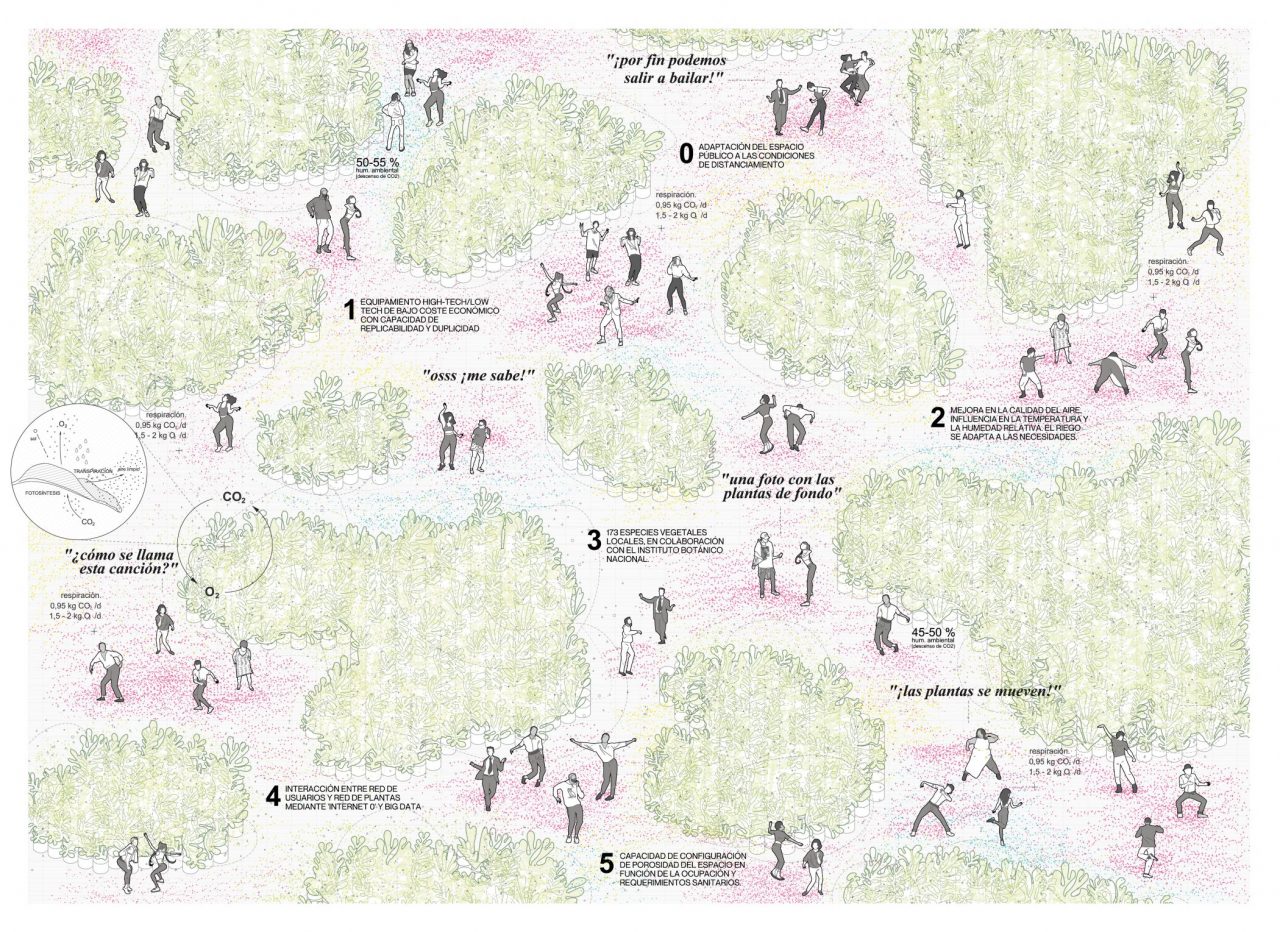 All the recommendations from medical authorities go through maintaining the distance between people. That creates a void between us destined to be unused, but why not take advantage of it to fill it with nature? We are being given the opportunity to shape the future, and we cannot imagine one that does not go hand in hand with nature and technology.

Our proposal is based on a system made up of a physical component and a virtual one in continuous feedback. The physical part is a system of pots that move automatically to create various configurations and groupings of vegetation to limit agglomerations and ensure social distancing. The virtual component consists of a central system for analyzing and managing the data collected through sensors, which transmits information in real-time to each pot on where to move in the urban space.

The units that comprise the system are flowerpots: mobile elements that consist of vegetation, wheels, and a micro-computer, which allows their automation and directs their movement, following the central system’s orders to which they are connected wirelessly.

The information generated and collected in each of the public spaces creates an open-knowledge network with continuous feedback, enabling the system to be adapted to any public space and to any budget. Thus, a party could be held even without sufficient funding for its automation; by simply accessing this knowledge network, it would be possible to know where to position the vegetation manually to dance without risk.

It’s a block party, and we gettin’ started / Everybody got a chair, flyer in the lobby
Gotta the speakers up, fire hydrant on / All the kids is actin’ up, we just play along

We are a group with different interests, but we are all convinced that the right typography and some well-chosen colors can make this world a better place.

We like to do things à la sauvette, secretly, a la múa, but always seeking to get your attention. We want to show you what our way of seeing things is. 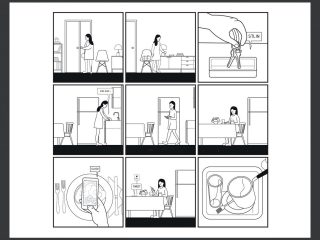 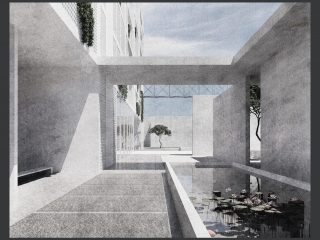