Introduction. This design was made for the competition “Tomb of Tomorrow” from Architize. We were asked to design a funerary architecture for a famous person or group of people that have, somehow, changed the History. The building could be located everywhere in the World and it could have a completely free program.

I struggled a lot thinking about the right person to choose for this project and after discarding a lot of options, I decided that celebrating immigrants and their history was a very present theme to tell.

Immigration is  a huge issue and theme right now, and it’s only few years that activists and politicians have started to care about the situations in countries where wars are tearing a part entire cities and cultures. In my opinion there was a single event that changed this situation, and it’s the one that I’m going to describe with this design.

Maybe I misunderstood the brief of the competition, but I strongly believe that history is made by single events, and from any sort of people. History can be changed by the death of ordinary human being, so, for me, it was difficult to celebrate the figure of an amazing scientist or a great politician, I rather preferred to tell the story of 12 brave refugees, that were trying to escape from the war. Also because, from the tragic death of one of them, probably the most defenceless one, the entire World started to be aware of the situation in Syria. The design theme. The night between the 1st and the 2nd of September 2015, Alan Kurdi his mother and brother and other nine people passed away in the middle of the Mediterranean Sea between Turkey and the Greek island of Kos. They were running away from the war that is demolishing their country, Syria, hoping for a new life in Europe.

Because of this fact and the famous and tragic pictures of Alan’s body laying on Turkey’s coast, the entire world finally became aware of the situation in Syria and of the situation of the syrian refugees that tried to escape.

Without these twelve people, the entire world wouldn’t probably know so well the tragic syrian situation. Two days after this disgrace, the ASOR Syrian Heritage initiative announced that the ISIS army bombed one of the most stunning example of mortuary architecture in the Middle East, the towers in the Valley of the Tombs. These buildings were amazing vertical tombs built more than 2000 years ago.

This creepy coincidence moved me to design this memorial, a memorial that aims to celebrate the story of these twelve people dead in the sea (as many other hundreds of them), give a proper burial to all the refugees dead in the Mediterranean Sea, recalling this interesting and amazing mortuary architecture.

I decided to locate the memorial in the mid point of the route used from most of the refugees to reach Europe by boat from Turkey (36°56’46.5”N 27°21’12.6”E), probably the point where the boat of Alan wrecked. Architecture Concept. For this building I chose to have a much stronger conceptual approach than structural or programmatic. In fact, it has no program, it is a sequence of commemorative and meditative spaces connected by a path.

While starting designing, the image of the towers of Palmyra was very strong in my mind, and so I decided that the building should has been a podium that would be able to bear the demolished towers of Palmyra.

Through the image of these 12 towers floating on the sea, I’ve started thinking at the different emotions I’d like the visitors to feel, while visiting this memorial.

There are three moments in this design.

The first one it’s the moment when, from the boat, the visitor can watch the memorial with the sun light. The light yellow limestone I chose, becomes warm and give the idea of a monumental building that amazes the visitors. It symbolizes the hope of the syrian refugees, while approaching Europe.

The second moment is representing the trip of the refugees. This trips where alway made by night and with very small and dangerous boats. So though a very dark path, the visitor will enter the 12 towers experiencing the feeling of the refugees.

The third moment is when, at the end of the path, the visitor climbs a staircase that brings him on the roof top of the podium, having a new view on the Sea, like a new hope for the Syrians. These there moments are modulated by the amount of solar light, starting from a very bright image, passing through a deep dark one and then again a new bright light (even brighter after the total obscurity of the memorial).

The only source of solar light are some holes on the ceiling of the towers, their disposition is directly taken from the stars disposition in the night of the 1st September 2015.

The pavement in the tower is a wood board floating on water, detached and not fixed to anything (in order to increase the idea of alienation in this space).

I wanted the visitors to experience the refugees’ feeling of navigating with only the star light, completely unstable and with no horizon. The only element in the towers and in the whole building, are 12 funeral steles with an inscription saying “a person”.

I kept a generic inscription because I wanted somehow to remember every refugee that lost his life in the sea, even the ones we don’t know the name. This building is not functionally useful, but somehow has a fundamental role. Every  part of it is essential to tell the final meaning of this memorial: these people lost their life trying to be safe, because of them, the World now knows about the situation in their country, and they must be celebrated and remembered.

Michele Marini graduated in April 2017 at Politecnico di Milano. He previously obtained a Chinese master degree at the Xi’an University of Architecture and Technology in 2016. He is a former Professor Assistant in two Design Studios at Politecnico di Milano. He has worked at June14 Meyer-Grohbrügge & Chermayeff (Berlin), and he’s now working for Nieto Sobejano Arquitectos in Berlin. Previous Project (p) On The Shoulders of Giants 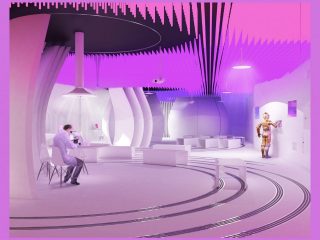